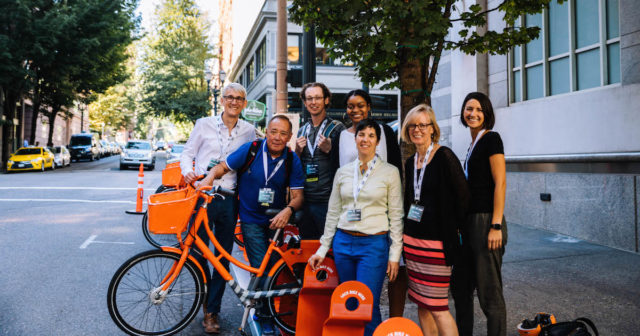 Since the beginning, bike share and micromobility have been rapidly-evolving forms of transportation. 2018 turned out to be no different, with continued equity and access efforts, the proliferation of dockless bikes, electric bikes, and the introduction of e-scooters in many U.S. cities.

We also hosted the 2018 Moving Forward Together conference in collaboration with the North American Bikeshare Association, an event that brought together a cross section of professionals to discuss important questions of bike share access, outreach, technology, and policy. You can download the conference presentations and other materials here.

While most major cities have already implemented bike share programs, several made expansions this year that helped individuals and families outside of downtown areas make use of the systems.

Pittsburgh was one such city, which essentially doubled its number of stations, partially due to a unique strategy of halving the number of bikes at each station in order to right-size them to actual population numbers. The approach allowed Healthy Ride to expand into three new neighborhoods.

Detroit was another city that looked to broaden its bike share reach, through the creation of satellite bike share hubs for outlying dense pockets of residents. MoGo also took inspiration from Portland’s adaptive bike share pilot to bring accessible bikes and tricycles to mobility-challenged individuals.

Discount and cash payment options on the operator end are a tried and true way to include riders struggling with finances. This year, Boston expanded its discount program to the full metropolitan region, making a $5 monthly pass available to SNAP cardholders across four separate cities.

Redistributing bikes can also have an equity component, as seen with Motivate’s Bike Angels program, which allows riders who help take bikes to docks in need to donate their points toward low-income passes.

Diverse hiring practices were also topics of conversation this year, including a helpful tool from the Urban Sustainability Directors Network.

Getting the word out

Charlotte is another community where bike share events run regularly, including Pedal to Porch, a program that leads local residents to the homes of long-time community members, so that newer residents can understand the history of the area.

In a creative twist, one bike share program in Ohio is even using bikes as a library resource that can be checked out just like books.

It’s important to talk about the big challenges ahead for bike share as well. During a Twitter chat hosted by Better Bike Share earlier this year, anti-gentrification activists expressed anger at the incursion of bike share into Los Angeles’ Boyle Heights neighborhood. Erick Huerta of People for Mobility Justice (formerly Multicultural Communities for Mobility) commented on the situation through an interview.

Other concerns that arose from community organizing circles included continued profiling of riders of color, as well as the recent trend of high-level government transportation officials being lured into the private sector by dockless bike and scooter share companies.

The National Association of City Transportation Officials continued to provide tools and resources for cities with bike share systems, including the comprehensive Strategies for Engaging Community document, as well as a 2017 review of bike share statistics. There are also one-pagers available on Indego’s cash payment and Access Pass programs.

Last, but certainly not least, is the much speculated upon rise of dockless bikes, e-bikes, and e-scooters.

Better Bike Share grantee Bike Walk Tompkins has taken the approach of working with dockless company Lime to pursue bike share equity goals, while several cities have big concerns about how such bikes can block the public right of way and compete with existing bike share contracts.

The Sacramento metropolitan area is one example of the embrace of pedal-assist bikes to increase ridership in hot or hilly areas, as well as for riders looking for more of a thrill.

In just the past few months, e-scooters have entered the arena. No one is quite sure yet how successful they will be, or whether they will compete or enhance existing bike share and public transportation options, as well as whether they will further equity goals.

Needless to say, it’s been a big year for micromobility, and 2019 is certain to even more to the table.