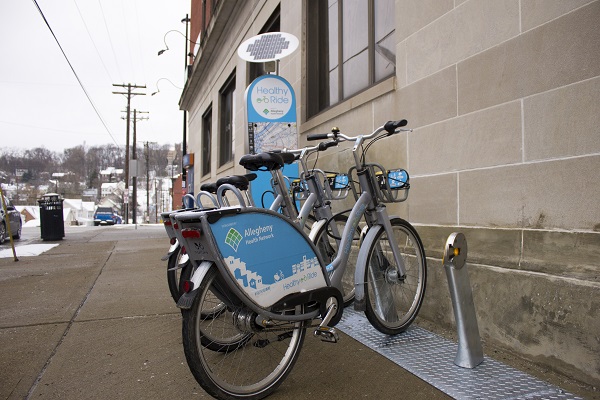 Pittsburgh’s Healthy Ride bike share system is up to 100 stations as of last month, thanks in part to an innovative technique for increasing station density.

The expansion began in summer of this year and has led to three new neighborhoods getting bike share — Homewood, Larimer, and Squirrel Hill. The system will continue to grow in 2019, with an additional 75 stations added during spring.

The new stations have already been associated with a bump in ridership, including an overall 5% growth and 30% increases during the busy July and August months.

What’s different about this expansion, compared to similar changes in other cities, is the decision to right-size Healthy Ride stations from 19 docking spaces to just 6-8 docking points. The process means that more stations overall are available per bike, which creates a denser, and thereby more accessible, network. Additionally, stations that were previously underutilized don’t have to sit around with wasted bikes that could be more useful at a different location.

It’s a strategy that could be convenient for other mid-sized cities with bike share. As Healthy Ride executive director David White puts it, “We are excited to create a system that has the convenience of a dockless network, but maintains the reliability and order in the right of way of a station based system.”

Their reliance on smart bike technology, where the bikes come with a cable lock and can be left away from a dock enables this flexibility, while sticking with the docked approach overall ensures that each bike is accessible to be inspected by mechanics on a regular basis.

In order to know which stations to make smaller and how many docks to remove, Healthy Ride staff gathered two summers worth of ridership data and made adjustments based on the information.

In discussing benefits to the approach White shared, “Small stations are easier to site. They remove fewer on-street parking spots, and connect with the public idea of using bike share for short, frequent, everyday bike trips.”

He also encouraged operators to keep in mind that community outreach and municipal processes might need more investment along with the larger number of docks.

By the time Healthy Ride’s spring expansion is finished next year, over 170,000 people in the region will live within a quarter-mile walk to a bike share station.