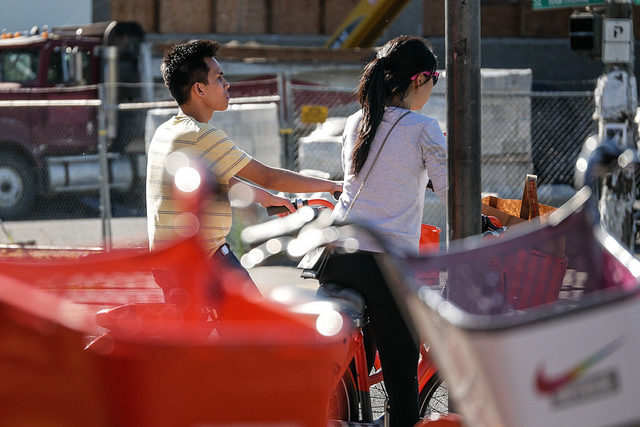 PSU’s TREC center released the final installment in its first round of bike share equity research a few weeks ago, and we’re sharing it again here to make sure no one missed the conclusion to this thorough investigation of the topic.

There were a number of similarities between the user survey and the prior resident survey. However, the strength of this study is that it allowed researchers to look closely at the factors that successfully hooked riders into using bike share in the first place.

The study divided respondents into three categories: 1) Higher-income and white riders, 2) lower-income or riders of color who have taken advantage of equity-focused discounts or outreach programming (known as the BBSP target users), and 3) riders who fell into neither category.

Additionally, targeted outreach programs were more more likely to be the reason that the lower-income users and/or users of color heard about bike share.

“Getting a discounted membership was clearly a major motivator for many of the BBSP target users,” said Nathan McNeil, a research associate for TREC. “63% in this group told us that they found out that they were eligible for a discount, and of those, 93% said it was very important in their decision to become a bike share member.”

Another important finding was that nearly two-thirds of BBSP target users paid for their memberships with a cash payment option — though that was in some situations the only option to obtain a discounted membership.

In highlighting the importance of discount programs, the study raises questions about how to harness their full potential. That includes figuring out how to keep people on as bike share users once they’ve accessed a discounted membership.

While most study participants said they would renew their membership, cost was frequently cited as a concern. Cities like Chicago have had challenges retaining members after their discounted membership goes away. This reality raises questions about how much of a discount is necessary and how long that discount needs to be in place to retain membership.

“I think real or perceived cost is a big issue,” said McNeil. “Half of the past members that we surveyed, and nearly two-thirds of those who were unsure of whether to, or planning not to, renew their membership listed cost as the top reason why. Not surprisingly, people who perceived they were gaining more financial value from bike share were more likely to plan to renew.”

McNeil speculated that approaches that help individuals see how much they save through using bike share or allowing single trip purchases to be applied toward longer-term passes could help bridge the gap.

One thing is clear — all users enjoy bike share once they have access to it. The number of trips among the BBSP target group was comparable to ridership by other demographics. And bike share was sometimes used in place of walking or transit trips. (Though interestingly, it did not generally replace car trips among those surveyed.)

PSU, along with Drexel University was awarded another research grant in BBSP’s 2018-9 cycle, where they will develop a comprehensive catalogue of bike share equity methods across the U.S., and work to determine whether individual systems are meeting their equity metrics.