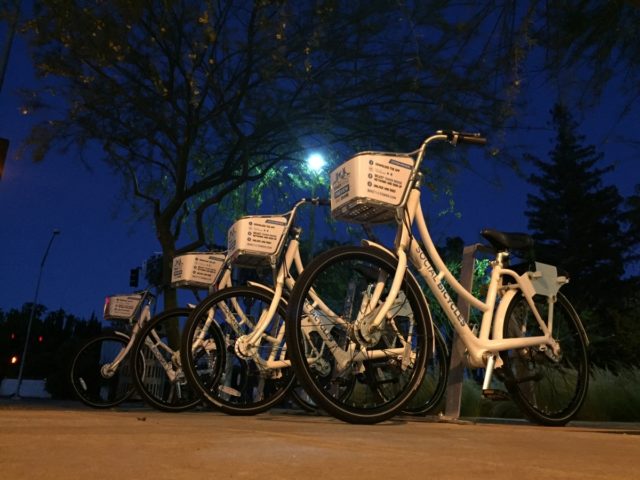 Electric bikes in bike share can make a lot of sense for some cities, but there are definitely big challenges to address as well.

Last week, we looked at a webinar on e-bikes by Bikes Make Life Better and PeopleForBikes, discussing what e-bikes are and why there’s a bike share connection.

We reached out to Providence, Rhode Island and Sacramento, California, as well as JUMP Bikes to drill down on how e-bikes are both promising and challenging for bike share. While there are many other cities experimenting with e-bikes, these two give a good sense of that the key issues are.

Both Providence and Sacramento have partnered with JUMP Bikes, and the company is hoping that e-bike share will make biking more viable as a commuting option.

“JUMP bikes feature e-assist so the experience of riding a bike is similar [to traditional biking], but you can go much farther and get there faster,” said Rikin Diwan, Vice President of Marketing at JUMP. “Our riders are sharing stories with us about commutes being cut down by a third to even half the amount of time compared to a regular bike ride.”

The company believes e-bikes can work well on their own or in conjunction with other modes.

“JUMP is often faster than public transportation or even Uber,” said Diwan. “We’re also seeing that the average distance travelled on a JUMP ride is 2 to 3 times the distance of a regular bike share.”

Providence, RI is putting 400 e-bikes on the street through bike sharing in 2018. The city originally got interested in e-bike share due to its hilly terrain. But city staff were also impressed by the element of recreation.

“Anyone who’s been on an ebike knows that you can’t ride one and not smile,” said Martina Haggerty, Associate Director of Special Projects with the Providence, Rhode Island Department of Planning and Development. “It’s just really fun.”

Haggerty and staff had originally planned for a traditional bike share system with some e-bikes included. But when they put out an RFP, they were approached by JUMP about doing an e-bike-only system.

The bike share program is one piece of Providence’s larger transportation and infrastructure improvement plan, under a TIGER grant and in partnership with the statewide Rhode Island Public Transit Authority. In fact, riders will also be able to take the e-bikes on public buses.

The system fits square in the middle of the hot topic of dockless bike share.

“It’s a semi-dockless approach,” said Haggerty. “It combines the best aspects of dock-based traditional systems with benefits of newer dockless systems that have emerged. Riders will be able to lock up to any public bike rack, pole, etc, as long as it doesn’t block the right-of-way.”

Sacramento, CA is another city starting up an e-bike sharing system with JUMP. Staff with the Sacramento Area Council of Governments are taking a regional approach. The new system is planned to have 900 bikes by the end of the year, and will serve the cities of Sacramento, West Sacramento, and Davis.

Rosie Ramos Gomez, a communications analyst with SACOG, emphasized how e-bikes could improve accessibility for those with mobility challenges.

“For people that have some physical limitations, e-bikes are easier to ride,” she said. “They can allow mobility for someone that otherwise might not have had that access.”

When the Sacramento area e-bike share system launches, it is expected to be the largest program of its kind.

As with any new system, questions of equity are important to consider. When it comes to e-bike share, some are figured out, and some are still pending.

JUMP Bikes offers its Boost Plan in San Francisco to assist low-income residents in accessing its systems. Eligible participants pay $5 for a full year of access, including 60 minutes of ride time per day and a $.07 per minute base price after that.

“We’re looking at extending our Boost plan to future cities and implementing a really simple cash plan on our website later on this year,” said Diwan.

Providence is taking matters into its own hands by offering an income-based subsidy to local riders. The discount will provide bike share access for $20 per year with an hour of free riding per day. In comparison, the usual membership price is $20 per month.

Staff in Providence are also looking at ways to mix up the traditional community outreach meeting model by attending existing community events, festivals, and meetings to spread the word about bike share.

Sacramento is hopes JUMP’s Boost Plan can eventually be included in their system. They are also working on their engagement process, which will include public open houses, online mapping tools, customized marketing, and partnerships with local businesses and organizations. They have a grant from the California Endowment to to extend their outreach.

JUMP said that it is also considering accessibility from the standpoint of station distribution and infrastructure.

“It’s really important to us that we work with a city well before we put a single bike on the road for our riders,” said Diwan. “We need to make sure biking infrastructure like bike lanes are adequate, that bike parking is available, and also that our system is designed to benefit more than just the downtown areas of a city. It’s also important to be in neighborhoods that often are the last to receive new technology and options but in our case work well because of the benefits of e-bikes. We not only work with the city but also talk to countless community groups to hear their concerns first.”

How equitable the systems will be once on the ground remains to be seen.

One aspect that everyone sees as a challenge is how to keep the e-bikes charged for riders.

“The biggest difference [with e-bikes] is that there needs to be additional thought that goes into how and where bikes will be charged,” said Ramos Gomez. “And we have to work with additional partners for power. Overall, there are additional operation costs when compared to a traditional system.”

“We’re actively working with local businesses, as well as the cities we operate in, to deploy a robust charging infrastructure so that riders always have the best experience and availability to bikes,” said Diwan.

Haggerty said she hopes there will be a way in the app to see how charged a bike is and to report any issues on the ground. Both she and Ramos Gomez urge cities to consider early community engagement when e-bikes are involved, in order to figure out tricky issues such as familiarity with e-bikes and bike charging concerns ahead of time.

If you missed the first post in this two-part series, check it out here.