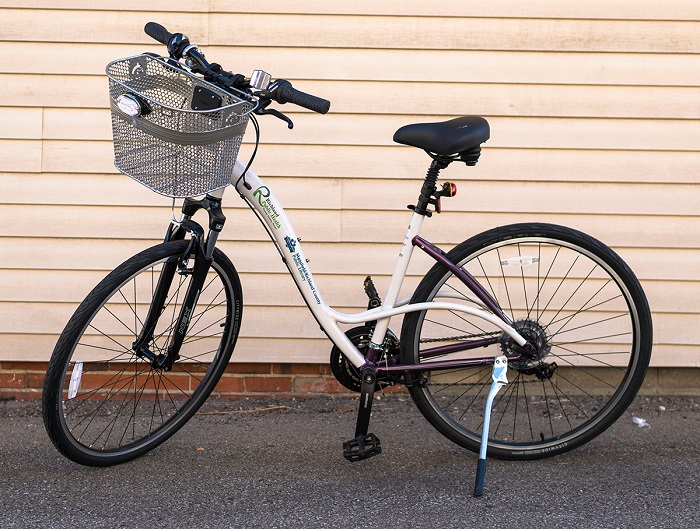 Libraries are changing to stay relevant in the modern age, and that includes bringing bike share into the picture.

In Mansfield, Ohio, the library and public health department have been collaborating to build a bike share system that’s based in the library itself. The process shines a light on both the continued importance of libraries as a community resource, as well as how how small towns and rural areas can use existing institutions to launch bike share.

How bike share got built into one library system

When Mary Frankenfield of the Mansfield/Richland County Public Library system was approached by the Richland Public Health Department about ways to use the library as a public health resource for the community, she automatically thought of bike share.

“I had seen a couple of articles about lending bikes,” said Frankenfield. “We started talking about it and wondering if that was something we could do. Richland Public Health had a grant to purchase equipment.” Frankenfield says she was also inspired by rides led by local group Richland Moves.

Frankenfield notes that libraries have been trying to figure out over the past few years how they fit into a new world where most information is accessed through the Internet, rather than from books. And that is what libraries were originally about, she says — accessing information that was previously only available to the wealthiest members of society.

Bike share became an idea for one component of an expanded vision of access to information and resources.

“The health department has been great,” said Frankenfield. “They did the bulk of the research about specific bikes and sizes we would need. It was important to me that we worked with local bike shops as much as possible, so we went to one from Lexington and one from the Mansfield area and got a lot of great info from them and suggestions on which bikes to purchase.”

Frankenfield emphasizes that the system is still very small at the moment — 10 bikes to be exact, that launched in October of 2017. The initial rollout was mainly a pilot project, with just a few checkouts happening in the two months the bikes were available. But the bikes well be available again this year from March to November, and there is a plan for advertising and community engagement this time around.

How to check out a bike from the library

Frankenfield wanted to keep the process of actually checking out a bike as simple as possible — both for patrons and for the staff who would be responsible for managing the bikes. The bikes are currently free of cost to use, as long as the patron has a library card and an ID for name verification.

“They use their library card to check it out, just like a book or movie,” Frankenfield said. “Then staff members take them to the bikes, where there are different sizes available. We provide both the bike and a helmet, and patrons have to bring the bike back the same day before closing. We’d like to lend them out longer, but keeping them secure overnight would be a challenge.”

When patrons bring the bikes back, staff do a quick check of the equipment using a preset form. So far, they haven’t had any issues with getting the bikes back, though Frankenfield is aware that could become a challenge in the future.

The bikes were available last year at two of the library branches that are close to a popular local bike trail. Frankenfield hopes that this time around they can put some of the bikes in the downtown area, so that non-recreational riders can access the bikes as well.

Big plans for the future

Frankenfield is excited about the opportunity to reach more riders through outreach this season. She’s also curious about expanding the service to include adaptive bikes, for those with physical mobility challenges. Additionally, the library is exploring the possibility of adding bikes into the system that have been donated by local residents, which would expand the number of bikes available and make any potential theft issues less of a financial blow.

When asked what advice she has for other library systems that might be interested in starting their own bike lending systems, Frankenfield says to find a partner and to not be afraid to start small.

“Work through kinks on a small scale to implement on larger scale,” she said. “For most libraries budget is always an issue. Ideally, finding an organization like Richland Public Health is absolutely the best way to go. Or if you can find someone at the library to write a grant. There are really fancy ways of doing bike share. That’s sort of the pinnacle, but remember that it’s not all or nothing.”

She also says that it’s important to be able to clearly express to the public why the program is important and how it falls under the scope of library services.

Library collaborations are happening in other places too

The Mansfield/Richland County Public Library certainly isn’t the only library system to be building or partnering with bike share. In fact, there are lots of different models out there. Libraries in Oakland, California and Basalt, Colorado, for instance, partner with bike share systems to hold events and raise awareness about the services. And in Philadelphia, Pennsylvania, the library system serves as a key location for potential bike share members to sign up and learn about bike safety. The Digital Skills and Bicycle Thrills classes are one example of such a program.

So, despite a declining emphasis on books and more of an emphasis on digital resources, libraries are still a trusted location for community outreach and education on wide variety of initiatives — and bike share can be a part of that as well.