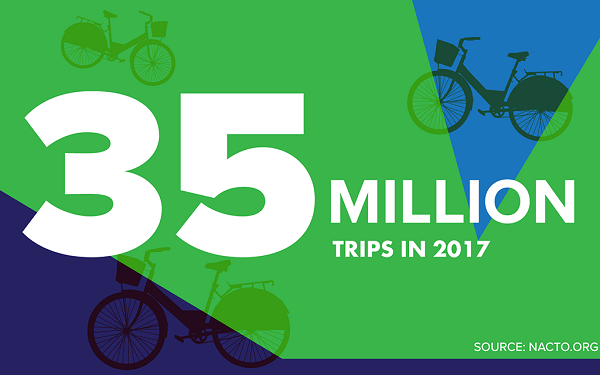 According to a recent report released by the National Association of City Transportation Officials, bike share is thriving and well in the U.S.

The report marks the second annual count of U.S. bike share rides and showed that in 2017 there were more than 35 million bike trips taken overall, which is 25 percent more than the number taken in 2016. A large percentage of trips were taken within large station-based systems such as Citi Bike NYC, Divvy of Chicago, Capital Bike Share of DC, and Hubway of Greater Boston.

Another key finding was that more than 123 million bike share trips have been taken since 2010, and it comes at no surprise that the number of companies entering the bike share market has been going up rapidly of late.

The study notes the entrance of dockless bike share to the existing market in 2017, which has quickly gained a 44% share in all bikes on the ground, but represents only a 4% portion of rides thus far.

On the equity side, the number of station-based systems that offered a discounted membership rate rose from 24% in 2016 to 32% in 2017.