In Omaha, Nebraska, Heartland BCycle engaged local youth to turn a portion of its fleet into movable pieces of public art. 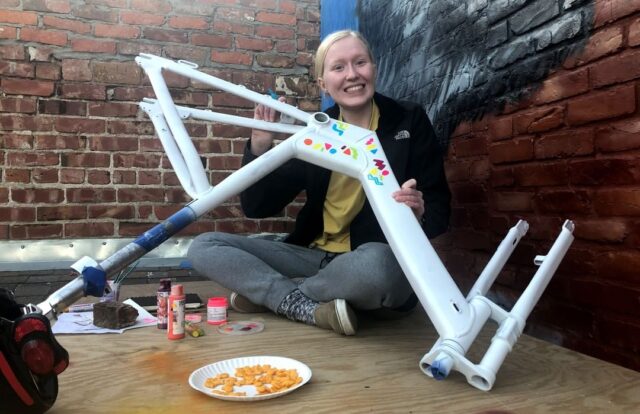 In the summer of 2019, when Fiona Kennedy started as an intern for Heartland BCycle in Omaha, Nebraska, she was also an intern at the Union for Contemporary Art. Kennedy’s day-to-day activities for Heartland included working on the organization’s equity program, while at the art museum—located in a North Omaha neighborhood known for historic red-lining—she was leading tours and familiarizing herself with the museum’s youth Action Brigade, a once-a-week initiative for students age 12-14 from the surrounding zip codes.

Upon completing her internship, Kennedy was hired to stay on with Heartland as its Community Manager. When the opportunity arose to apply for a BBSP mini-grant, she immediately thought of recruiting kids to customize Heartland’s BCycle bikes with their art. Kennedy tapped the Union of Contemporary Art’s Action Brigade as a partner, as well as the Joslyn Art Museum’s Kent Bellows Mentoring Program, which works with teenagers age 16-18 from neighborhoods throughout Omaha.

“From start to finish, this project was a really smooth collaboration with multiple organizations,” says Kennedy, who grew up in Omaha. “Everybody was just fully on board and ready to do whatever we could to get these bikes out there.”

The BBSP mini-grants were awarded to projects that sought to increase access to and use of bike share in low-income neighborhoods and communities of color. Working with the Kent Bellows program ensured that students from all Omaha neighborhoods were represented, as one of the goals of that program is to connect youth from disparate zip codes. By engaging youth from all parts of Omaha, and specifically the more diverse neighborhood of North Omaha through the Action Brigade, Heartland was able to reach a broad segment of Omahans directly through its most important stakeholders: the youth. 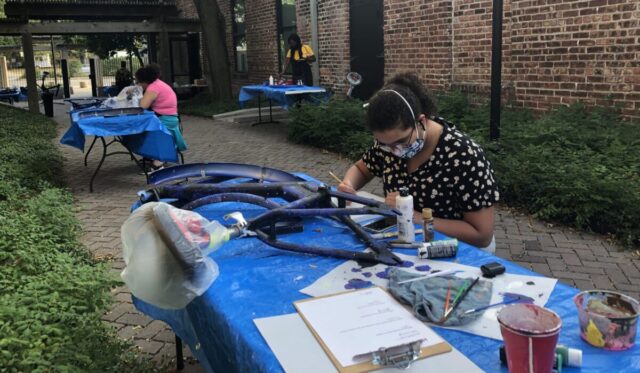 Teenagers from the Union of Contemporary Art work on their projects while maintaining COVID-19 precautions.

“Equity was definitely carried through our project by choosing to work with these two organizations,” says Kennedy. “Especially through the work with those in North Omaha, which is a target community that we want to make sure has access to bike share.”

Heartland is focusing on expanding its station footprint into the area, as well as finding ways to get more people on bikes and, importantly, comfortable riding.

“We want to expand bike share to North Omaha without it seeming like a form of gentrification,” says Kennedy. “This art project was one of the puzzle pieces in that larger project—if we work with neighborhood youths to hand-paint these bikes that become a public community resource, then it shows their ownership of the system.”

The Kent Bellows program, with its students from all over the metro area, was also envisioned as a way to create a feeling of ownership throughout Omaha. The two art organizations, however, took totally different approaches when it came to mentoring their kids. The Kent Bellows students, who were older, dove right into their projects, completing 10 art bikes by Fall of 2019. Those bikes were showcased at their Winter Art Show, which drew roughly 700 visitors, as well as in this video. The Kent Bellows bikes have also all been nominated for an Omaha Entertainment & Arts Award in the category of “Outstanding Public Art.” 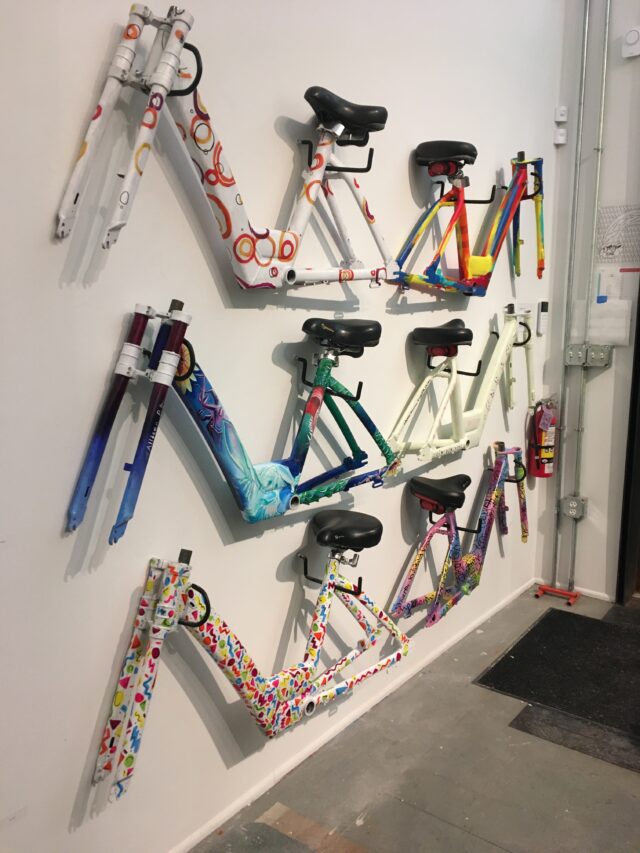 Bikes designed by students in the Kent Bellows Mentorship Program on display at the group’s Winter Art Show.

The Action Brigade, with its younger students, took a different approach, dedicating the first half of the year to teaching students about the various transportation options available throughout Omaha, complete with public art projects geared towards a variety of transportation modes and numerous speakers drawn from local experts in the field.

“Students met weekly and small art projects were incorporated into every class,” says Kennedy. “For example: Students met with a city planner, did a walkability study of the blocks surrounding the museum and then completed an art project on what an ideal walkable community looks like.”

The Action Brigade students began hand-painting their bikes in March of 2020, right before the pandemic. All parties involved, including BBSP and Heartland, emphasized that safety was the top priority and the project was temporarily put on hold. Once the weather warmed and students could socially distance while painting outside, the majority of the bikes were finished (two students opted to finish their bikes in 2021). You can view all of those bikes, as well as each artist’s design inspiration, in the video below.

“The biggest thing the artists really missed out on was the community events we were going to attend this summer,” says Kennedy, noting that to compensate for the lack of a formal public celebration, family members of all the artists were given free Heartland BCycle passes. “We held a group ride—led by a planner in North Omaha—so that the artists and their families could get comfortable on the bikes and using the system. That was an important thing that we were able to do without all the larger community events.”

There are now 18 art bikes scattered amongst Heartland BCycle’s fleet of 400 throughout Omaha’s 72 stations. Ellie MacGuire, one of the Kent Bellows youth, loves how the project brought two of her passions, bicycling and art, together.

“I want people to have a freeing feeling when they see and ride my bike,” says 18-year-old MacGuire. “I hope it meets the bicyclist wherever they are. I believe that both art and getting outdoors to move your body are the best ways to express and release all the troubles and blessings of life.” 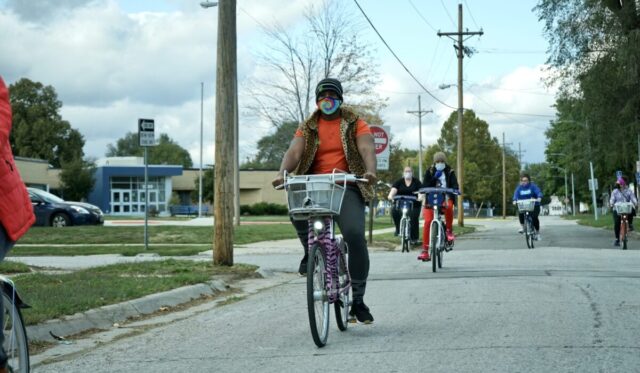 Artists and their families take a group ride in North Omaha.

So far, everyone who’s ridden the bikes (which have taken 637 trips thus far) has loved them. “We’ve received incredible feedback on the project,” says Kennedy. “We get a lot of riders sending us pictures when they see them.”

By working with local partners and taking note of a thriving art scene—and specifically the way public art can help build ownership and cultivate communal joy—Heartland was able to pull off this art project for around $10,500.

“I think this project has also broken down some barriers, showcasing that we’re not a gigantic corporation behind this bike sharing system,” says Kennedy. “We’re a local nonprofit and everything we do is for the community, so it’s been cool to see people recognize that. It’s really had a much wider impact than we ever imagined.” 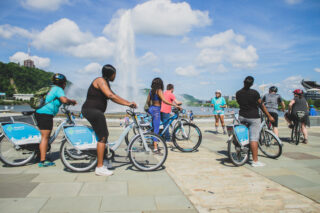 The Better Bike Share Partnership (BBSP) has awarded $79,600 in small grants to increase access to and use of bike share in low-income neighborhoods and communities of color across the U.S. 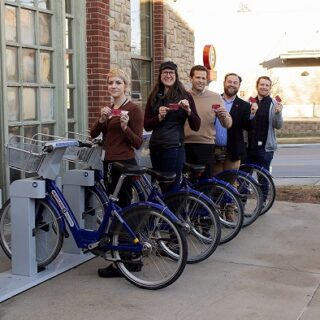 Meet the first two mini-grantees of our new round -- both based in Nebraska. 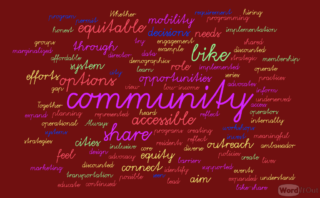 What does equity in community engagement look like? There are tons of ways to achieve it. Here's what it means plus how to incorporate it into bike share.