Artist Christin Apodaca poses with her SunCycle bike and mural, “Contigo,” or “With You.”

El Paso is a border town, a bicultural 680,000-person community that is as influenced by Mexico as it is Texas. It’s a place where migration remains an ever-present theme and where “the border” is seen for what it is: an arbitrary line that causes more inconvenience than division. While there’s certainly economic disparity between Juárez, Mexico, and El Paso, walking between the two serves as a strong reminder that mobility helps carry culture, which itself has no bounds. Nowhere else is that as clear as El Segundo Barrio.

Spanish for “the second neighborhood”—it’s the second oldest in El Paso—the historic Hispanic area was considered the “other Ellis Island,” so famous was its status as a port of entry. Today, El Segundo Barrio is known for its large-scale murals, which were described in one New York Times article as forming an “outdoor museum of the border proletariat,” and in another, more recently, as “a master class in life on the border.” There are dozens of brightly colored murals in the neighborhood, an embodiment of the idea that all art is political.

In early 2021, the Camino Real Regional Mobility Authority (CRRMA), the agency that oversees SunCycle bike share in El Paso, applied for a BBSP mini-grant to bring El Segundo Barrio’s murals to bike share. While SunCycle doesn’t currently have any stations in the area, it recognized its historical significance to larger El Paso. It also made sense to incorporate art that could speak to the city’s Hispanic residents (80% of the population) while also helping to educate riders on issues related to immigration, Indigeneity, and Mexican-American culture.

“We celebrate the border in El Paso,” says Robert C. Studer, director of finance for the CRRMA. “For generations, people have been crossing the border into Segundo Barrio and launching their families into America. It’s this beautiful transition point between the United States and Mexico and we wanted to bring attention to it.” 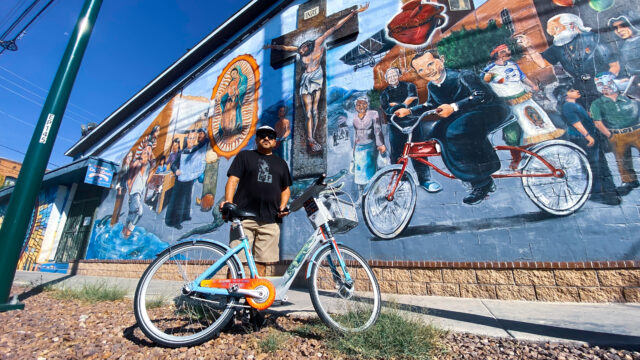 SunCycle decided to choose murals from El Segundo Barrio and commission the artists to paint a bike share bike in the theme of their respective murals. Once the bikes were painted, QR codes were added to each bike’s basket decal, as well as station kiosks, which shared information about the program, its artists, and the murals. The hope was that the program, dubbed Barrio Bcycles, would introduce more people—residents and tourists alike—to the artwork and to bike share.

“Driving through a neighborhood, you don’t notice a lot of stuff but it’s different if you’re walking or riding a bike,” says Studer. “You’re going to see more and be aware of the sounds and the people whose paths you cross. Our hope is that people will see the art on our bikes and say, ‘I’m going to go down and see these murals.’”

Considering the abundance of quality art in the neighborhood, some 50 years old, choosing the seven murals to feature proved difficult. Many of El Segundo Barrio’s murals have been done anonymously, while the artists of others have left the city. SunCycle also wanted to prioritize female artists, a rarity amongst the city’s muralists, and for the murals to be spaced far apart but not too far, a footprint that would allow for riders to eventually complete a mural tour. Likewise, murals in hard-to-reach areas—such as courtyards or on private residences—were out of the question. Eventually, SunCycle landed on eight artists and seven murals:

For many of the artists, turning a building-sized mural into a piece of art suitable for a bike was a challenge.

“Going from nice and big to really tiny was weird,” says muralist Christin Apodaca. “The hand cramps were real—patience was tested.”

The bikes were also disassembled prior to painting, which made envisioning how the art would fit together difficult. Regardless, the artists, who were paid for their work, enjoyed participating in the project. Several filmed short videos for SunCycle’s social media channels that offered insight into their artistic process. 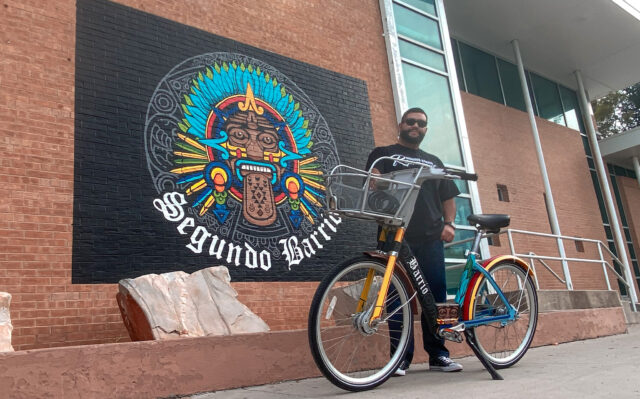 Roberto (Bobby) Lerma stands with his mural and bike, dubbed “Quinto Sol” (the fifth sun) in Spanish or “The Rebirth” in English.

Once the bikes were complete, SunCycle used part of its grant funding to hire Barracuda, a public relations firm familiar with the murals and their significance, in order to help generate buzz around the project. The bikes we debuted during a group ride featuring artists, media, and program supporters. SunCycle also made the last-minute decision to release masks emblazoned with the Barrio Bcycles logo and informational QR codes, which proved a popular move. For all of the project components, from the masks to the art supplies, the organization was intentional about sourcing from local purveyors.

A widespread social media campaign has continued to generate excitement around the bikes, which are being checked out at greater rates than their generic counterparts. In addition to encouraging folks to explore the neighborhood on their own, SunCycle plans on organizing more bike rides and curated tours of El Segundo Barrio. Studer pointed to a recent Girl Scouts troop ride as inspiration for future events.

“They’ve probably seen the murals represented other places but they may not have seen the original murals and the size and the scope of them,” says Studer. “To have that dialogue about what they represent, what the neighborhood means, and our ongoing issues related to the border and migration—I think that was a good way of introducing the Girl Scouts to a different perspective.” 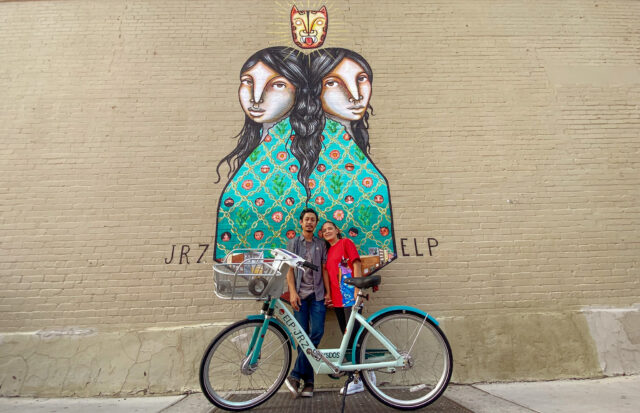 Long term, Studer hopes to secure the finances to expand bike share into El Segundo Barrio. He sees the Armijo Library—home to “Discover the Secrets of the Universe through Your Library,” a stunning mural by Carlos Callejo—as a potential location. In the meantime, the bikes themselves will encourage riders to visit the neighborhood and its many murals, helping to facilitate conversations around social justice, political action, and mobility.

“These murals matter to so many people,” says Studer. “They matter to the region.”

The Better Bike Share Partnership is funded by The JPB Foundation as a collaboration between the City of Philadelphia, the National Association of City Transportation Officials (NACTO), and the PeopleForBikes Foundation to build equitable and replicable bike share systems. Follow us on Facebook, Twitter, and Instagram, or sign up for our weekly newsletter. Got a question or a story idea? Email kiran@peopleforbikes.org.

In Categories: Stories
In Tags: Mini-grant
In Topics: Community Art 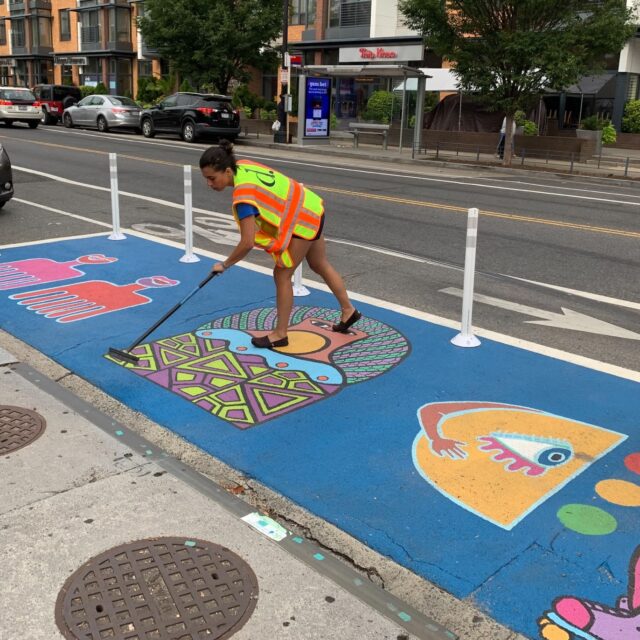 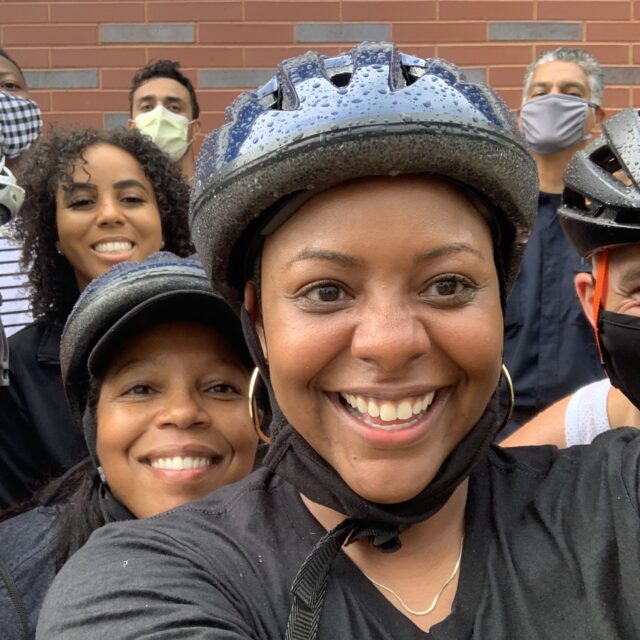