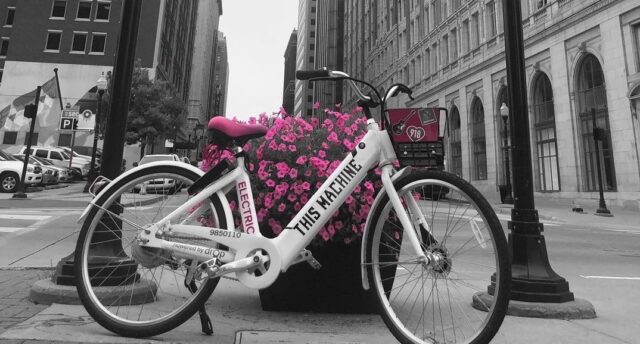 This Machine is Tulsa’s bike share system, which used a BBSP grant to increase Latino outreach. (All photos courtesy)

Tulsa, a city of roughly 400,000, sits along the Arkansas River in northeast Oklahoma. In 2018, This Machine, the local bike share system, launched with 160 pedal bikes. The nonprofit was named in honor of singer-songwriter Woody Guthrie, a famous Okie, and a slogan he prominently displayed on his guitar, “This Machine Kills Fascists.” With that message, Guthrie was saying that his music had the ability to promote democracy, human rights and equality—in adopting the phrase, Tulsa is saying that bike share has the power to do that, too.

When This Machine first started, it had a footprint of 2.5 square miles, mostly downtown. In 2019, the organization expanded to 5.5 square miles, moving further east into the Kendall Whittier neighborhood. Low-income and largely Latino, This Machine was excited about the opportunity to engage more people but cognizant of its limits.

“Bike share is a forward-thinking industry and our equity efforts should work to lead our community forward as well,” says This Machine’s Executive Director Katie Sawicki. “Part of moving forward is recognizing where you are not doing so well, and our resources and outreach efforts needed to be more inclusive and intentional.”

Sawicki saw the 2020 BBSP mini-grants as an opportunity to try something that seemed like a good idea but may have been impossible without additional funding. This Machine asked for $7,600 to hire a part-time bilingual outreach coordinator to connect to and engage with the city’s Latino residents, particularly those living in Kendall Whittier.

Says Sawicki, “The mini-grant gave us the jump start we needed to fix where we were failing and the base to continue on in a more inclusive manner.”

This Machine hired Lehabim Escoto Flores, who was able to translate the organization’s App, wayfinding signage and all outreach materials over the course of about five months. Although Escoto Flores was initially hired to do community outreach, bike tours and other in-person events, COVID-19 forced the nonprofit to pivot. Instead, he launched virtual social media tours complete with local interviews, as well as standalone videos in Spanish. The tours included interviews with locals and championed neighborhood businesses, helping folks feel connected and drumming up business throughout the pandemic. 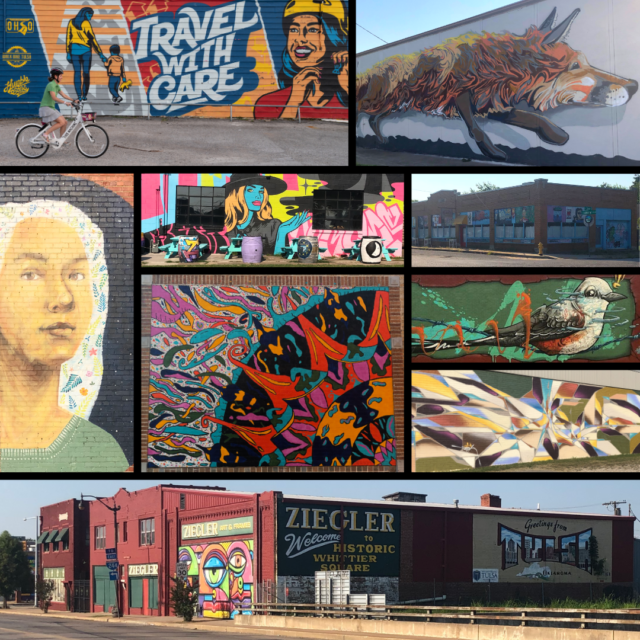 Some of the murals included on This Machine’s Kendall Whittier Mural Tour.

In June, as people became increasingly concerned about cleaning protocols and shared surfaces, This Machine traded its fleet of pedal bikes for 220 electric pedal-assist bikes. Having Escoto Flores on staff meant the organization could create Spanish videos outlining the rigorous cleaning protocol for This Machine bikes, as well as a how-to introduction to the new e-bikes.

“Our Spanish language efforts were a huge success,” says Sawicki, noting that several Latino community members started and continue to use This Machine to get to and from work each day. “Every time we posted a “How to Ride” video in Spanish, or “Free Ride” codes in Spanish on social media, we saw a significant bump in Latinx ridership.”

Without the option of in-person events, This Machine gave up on the idea of arranging events tied to Immigrant Naturalization Ceremonies or meet-ups at the Kendall Whittier Farmers Market. Instead, the nonprofit was able to engage the community through self-guided Historic Tours, Mural Tours, Brewery Tours and, during Hispanic Heritage Month, Taco Tours. An extension of similar city-wide rides, the tours proved especially popular during a time when most indoor activities were shut-down or restricted.

As the grant funding came to an end, the importance of having a community outreach coordinator on staff was obvious. Although Escoto Flores was unable to stay on as a full-time employee (he had already begun working for the City of Tulsa), he’s still part of the This Machine team, translating materials on an as-needed basis. In mid-June, This Machine hired Kieran May as its first “Outreach and Access Social Media and Events Coordinator,” and he continued the work Escoto Flores had started when it came to developing tours and other engaging content.

One of the Spanish fliers advertising This Machine’s free service on Election Day.

“What started as a part-time, temporary position has now morphed into a full-time position that is dedicated to designing fun programs, events and tours,” says Sawicki. “But it’s equally dedicated to equality, inclusion and improving access for all.”

As Tulsa’s Latino population continues to grow and This Machine looks to expand to other minority communities, it’s better set up to meet people where they are and invite new users in. In many ways, the new focus on community outreach has allowed This Machine to truly channel the Woody Guthrie expression that inspired its name. This past election, the organization made bike share free for those looking to get to the polls or as a reward for voting by mail—a democratizing effort that would have made the folk singer proud. This Machine promoted via social media and posted signs throughout Tulsa, in Spanish and English, something it plans on doing for every election going forward.

“‘Inclusive and diverse programming’ may sound like more work than just ‘programming,’” says Sawicki. “But by making services more accessible to all and more inclusive, our events and programs make more of an impact, create a more positive perception of bike share, and instill loyalty in our riders—everyone wins!”

In Categories: Stories
In Tags: Mini-grant This Machine
In Topics: Community Outreach 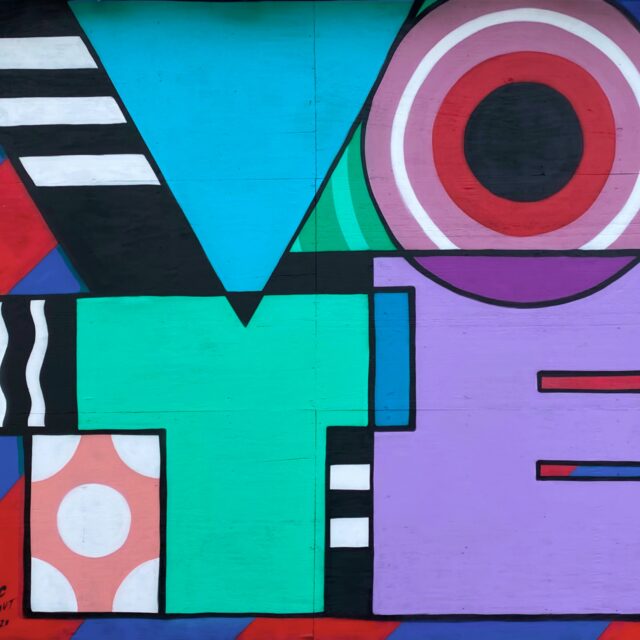 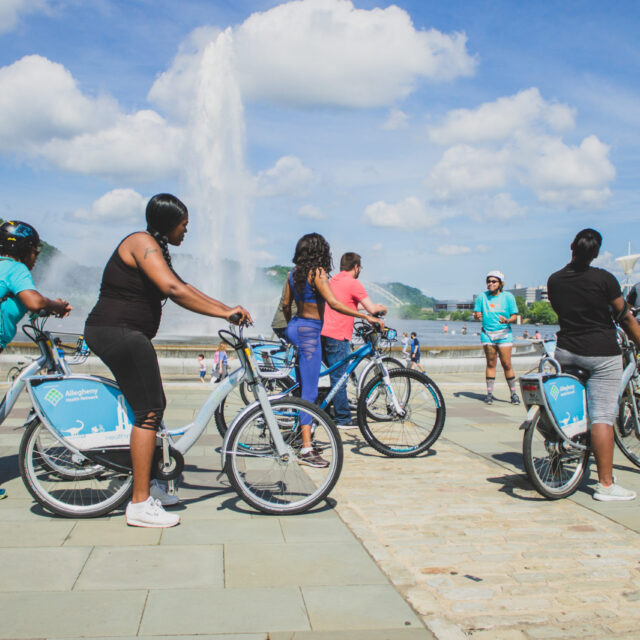 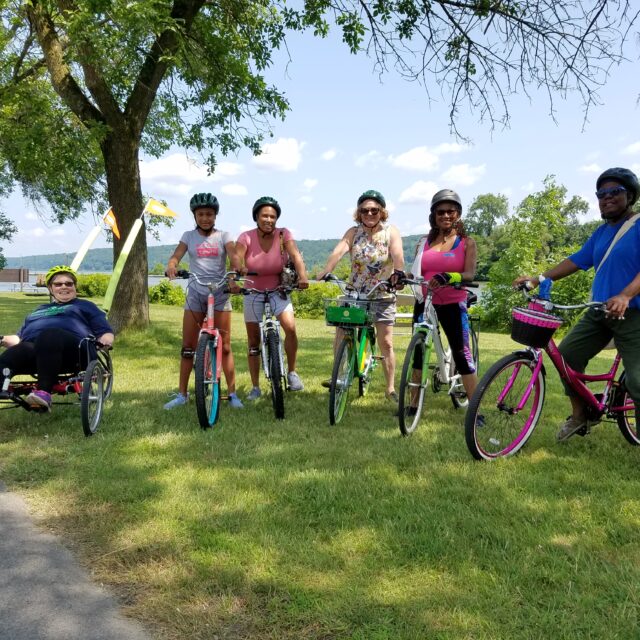