Since 2010, bike share and micromobility have spread across the U.S., with urban areas being first in line to adopt these new modes of transportation. Conversely, rural communities have yet to catch up. Today, we’re highlighting some rural bike share efforts and successes. 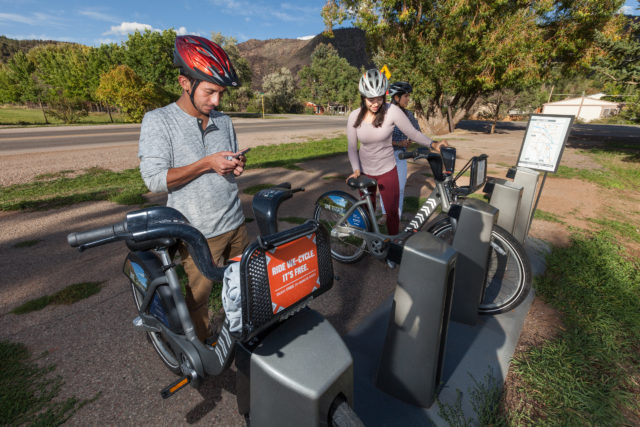 The first rural community in North America to receive a bike share program was Aspen, Colorado in 2013 — three years after bike share made its first appearance in the U.S. While known for its affluence, Aspen’s remote location and small population are representative of rural America: any population, housing, or territory not in an urban area, according to the Census Bureau.

Today, the disparity between urban and rural centers exploring and adopting these options is still significant.

With low density and long transit distances, rural communities present a unique challenge to operators, thus delaying the same level of multimodal integration most municipalities get to take advantage of.

However, “for the nearly 4.2 million rural households in the United States that don’t own a car, options for getting around can be limited,” explains Jimmy Lear of Shared Mobility. “Public transit is almost nonexistent, and cab rides are too costly for day-to-day needs.”

Why Is It Important?

Equity considerations are equally important in the rural setting. Everyone deserves access, and the model isn’t one-size-fits-all.

That’s where understanding the behaviors and transportation patterns of a rural community comes in, shares Mirte Mallory of WE-cycle, “because it helps identify which goals to prioritize during the process of reshaping bike share for a rural or less-dense area.”

When launching Movimiento en Bici in Basalt, Colorado, Mallory wondered, “How do we get people to and from the bus and reduce their need to use a vehicle?” Knowing the land-use patterns of Basalt’s 4,000 residents was key.

Mallory’s team realized this first mile/last mile connection was Basalt residents’ greatest transportation hurdle, so they worked to create a replicable program — based on the Aspen program — that could reduce the use of a vehicle without minimizing access or reliability.

“Rural places often experience the most acute need for innovative solutions to transportation access and affordability challenges,” said Transportation for America’s Robert Benner in a webinar. “In fact, small towns are where new technologies can have the greatest potential impact.”

Without mobility alternatives that can help people access tools to enhance one’s quality of life — good jobs, for example — rural citizens are reduced to lifestyles that don’t offer a varied scale of opportunity.

How Some Have Made It Work 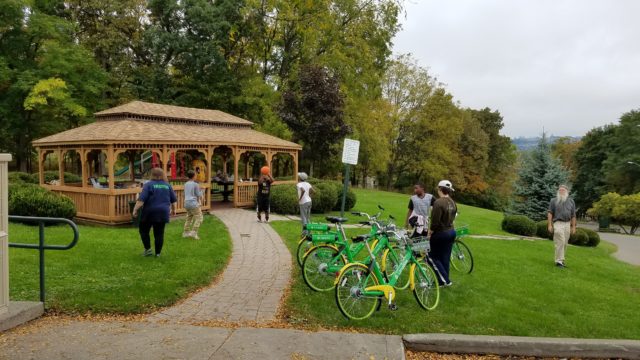 Whether it’s infrastructure or funding, introducing micromobility to any transport network is challenging for a number of reasons.

Nevertheless, the number of programs reaching disadvantaged and rural communities is increasing. Here are a few success stories:

Bike use and safety knowledge: Hector Chang, Active Transportation Coordinator at Bike Walk Tompkins (BWT), spent 2018 leading the integration of a bike share program with Lime in Ithaca, New York. The nonprofit, which promotes active transportation, partnered with Lime to address some of the barriers to bicycling found in a survey BWT conducted:

1. Over 50% of residents felt unsafe riding next to a vehicle.

2. About 30% of respondents were concerned about their bicycling skills and their physical ability to ride.

Chang also learned a third of Ithaca residents didn’t have regular access to a working bicycle. To address these barriers, BWT hosted a refresher course on operating bicycles and created an adaptive bike library for people with varying abilities and lifestyles. Its website also offers resources that teach bike safety.

Language barriers: In 2016, Mallory launched Movimiento en Bici to extend opportunities to ride to Basalt’s Spanish-speaking community. The program’s outreach efforts include employing an all-bilingual team and offering bilingual classes to adults to learn about bike safety, how to use the bike share system, as well as a refresher course on cycling.

We previously wrote about this BBSP grant recipient’s success, noting the program’s size doubled halfway through 2017. As of August this year, 89 members signed up and had 871 rides so far. Additionally, WE-cycle’s stations in El Jebel and Willits — communities neighboring Basalt — saw a 22% increase in ridership this year.

Density: Mallory worked around Basalt’s density by “adapting the system’s scale to fit a smaller city.” She placed bike stations directly near bus stops, residential areas and places of commerce, allowing residents to walk a short distance from their homes to a bike station, ride to a bus stop, and take transit to their destinations.

Income barriers: For systems in any city, making bike share accessible for low-income residents is essential. In fact, Chang, Mallory and many others have found several ways to make this work for riders in their city.

BWT’s partnership with Lime offers Lime Access, a program for low-income riders without bank cards or smartphones. Instead, these users can pay with cash, unlock a bike via text and take advantage of discounts on Lime products.

To keep operational costs to a minimum, WE-cycle in Basalt uses smaller, satellite stations that don’t have screens or credit card readers. Additionally, all WE-cycle rides are free for the first 30 minutes. Movimiento en Bici pass holders receive free rides of up to 60 minutes to “accommodate learning and adoption and reduce the concern of time as a barrier for not participating,” says Mallory.

Here are a few other rural communities making a big city difference in their small towns:

“Slow and steady wins the race,” is a fitting expression for the rise of rural bike share in America. What are some other bike share systems serving low-income, rural communities?