In the midst of the holidays we thought it worthwhile to show-off some of the seasonal bike share events happening all over the country. From decorated bikes to community service rides, getting around on two-wheels can make the season brighter. 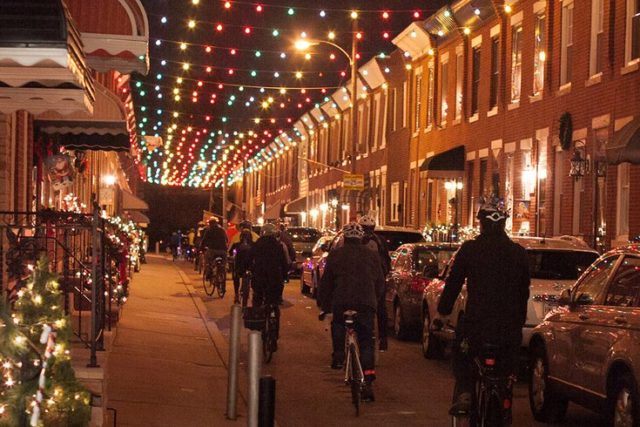 As usual Philadelphia is on top of the game when it comes to local activities. Indego bike share awarded mini-grants to community members doing giving back events for the holiday.

The mini-grant recipients included a former community ambassador’s organization, Don’t Shoot… I Want a Future, which is hosting its annual “Stay Warm this Winter” event providing hats, scarves, coats, and toys to underserved kids in the community. Another previous ambassador’s organization, Dare 2 Hope, is hosting a Big Holiday Giveback event, where they’ll be giving toys and gifts to families in need, as well as homeless shelters and youth placement facilities.

The other mini-grant was to Mt. Vernon Manor CDC/Neighborhood Advisory Sub-Committee, and Miles Mack Community Advisory Committee, who are hosting their annual Children’s Holiday Party for hundreds of children from Mantua and East Parkside communities. They are also giving away free winter items for children in the community and bikes to four lucky kids.

In addition, the Bicycle Coalition of Greater Philadelphia held their annual Holiday Lights Ride, and Indego offered 50% off for walk-up rides and waived all overage fees for participants using Indego. The community events served as an effective way of keeping prior bike share ambassadors involved.

In Chicago, riders can search for the festive HoliDivvy bike, released each year during the holiday season. It was featured at the “Walk With Light” event on the 606 Trail, before going out onto the streets for members to rent. There are also 100 special Divvy bikes with green front lights instead of the usual white lights for riders to find. 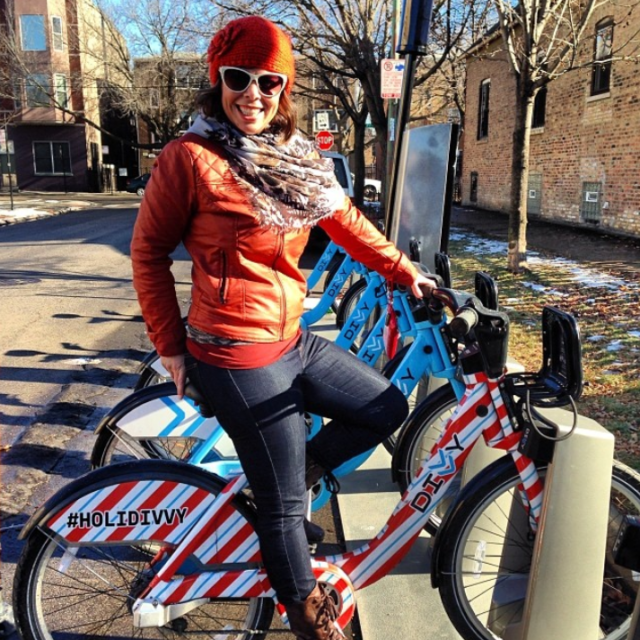 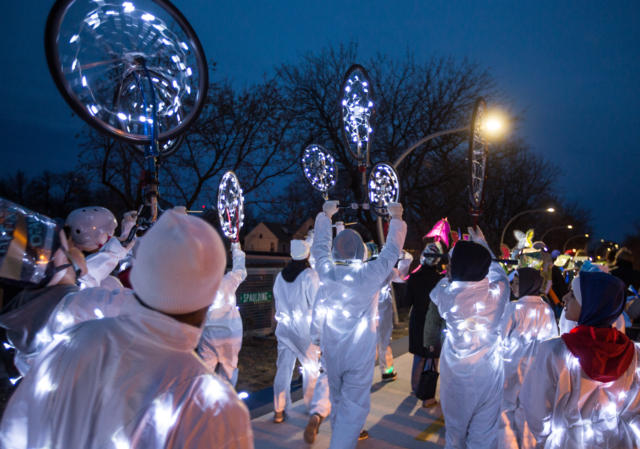 In addition to the activities from Divvy itself, community organization West Town Bikes holds a Women, Trans, and Non Binary Night each Wednesday. During these nights, the organization opens the shop to people to use the benches and tools, and they help them with both personal and bicycle issues. One of the recent nights was dedicated to making balaclavas for homeless people needing warm clothing, a show of winter community-minded service.

Similar to Chicago, Detroit’s MoGo system has a winter-themed Frostbike that has been released into the wild for riders to find. Additionally, riders have a chance to win free passes this season, take advantage of a buy one, get one free deal on monthly passes, as well as receive $20 off the regular price of an annual membership. Each discount can be given to others through gift cards. 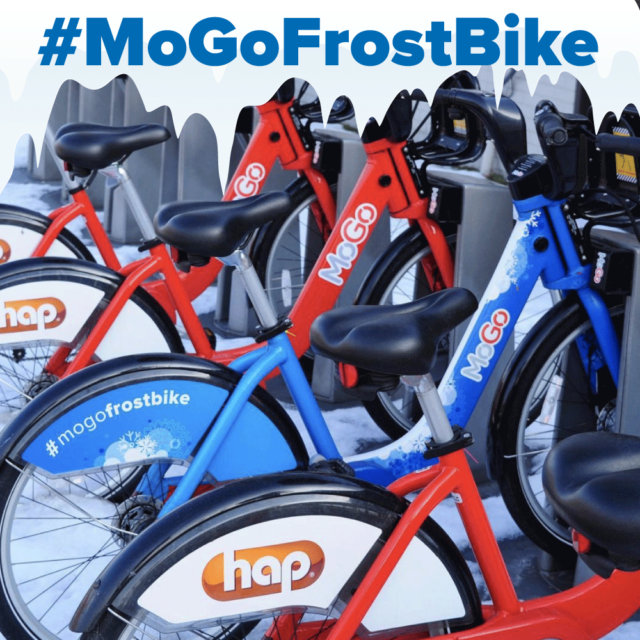 The Pittsburgh Healthy Ride bike share system is still celebrating its recent system expansion and is getting into the community spirit through a themed bike as well, the Heart of Gold cycle. 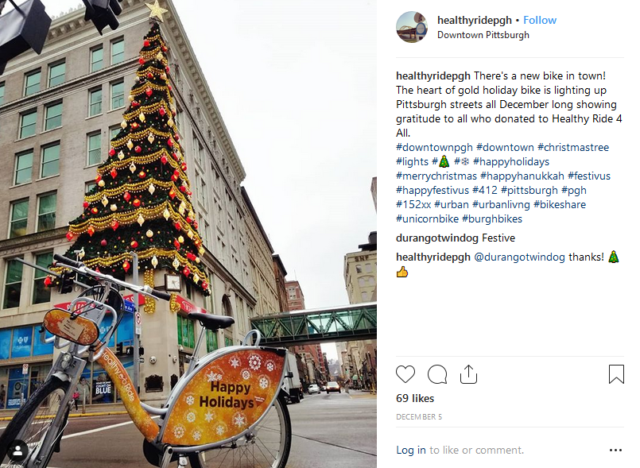 In Ithaca, riders are braving some very cold weather for Solstice Ride, followed by food and refreshments. The bicycling community there is no stranger to holiday celebrations, given their Halloween festivities as well. 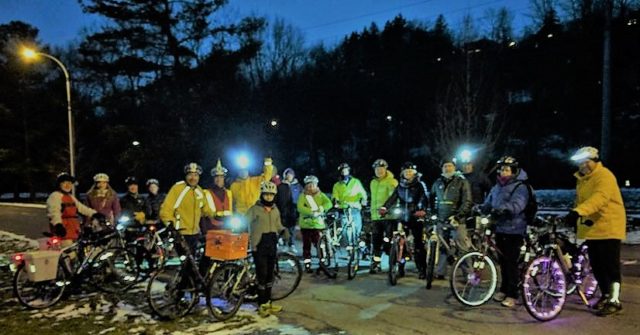 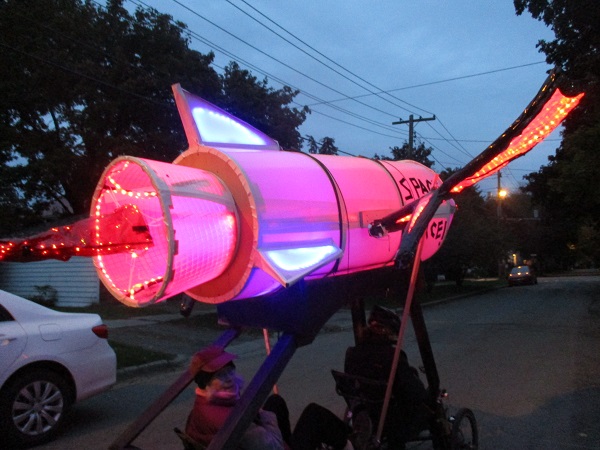 Blue Bikes in New Orleans served as a wheelbarrow of sorts for food donations this winter.The collection lasted for a two week period and was highly successful. Here’s a picture of a team member with some of the items, which were then donated to Second Harvest Food Bank. 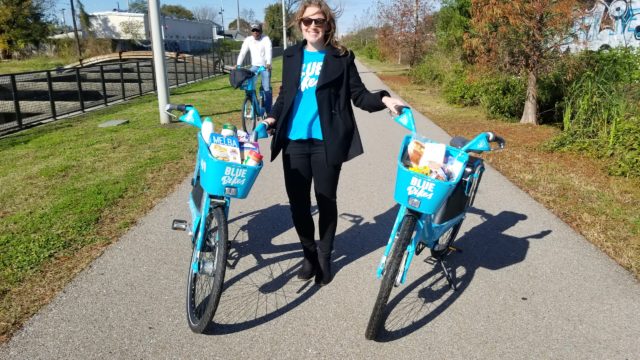 The bike share system is also handing out free passes to recently-incarcerated folks, public housing residents, and medical aid clients, as well as a reduced fare option of $20 a year.

Atlanta’s Relay Bike Share encouraged members to use the system for holiday activities with visiting friends and family by reminding riders how to check out multiple bikes at a time under the same account. The operator also included a list of local holiday events which can serve as a destination for bike share trips. 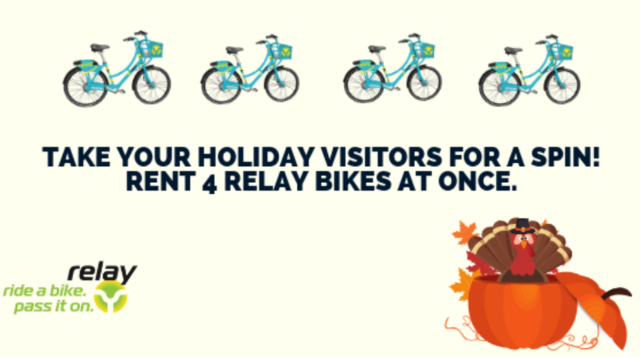