POGOH bike share, which will officially launch on May 2, has been designed with equity at the forefront. 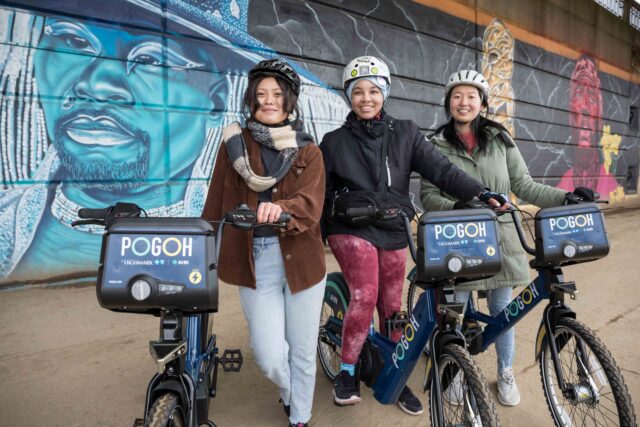 Since 2015, Pittsburgh’s bike share system — originally called Healthy Ride — knew that its equipment provider, Nextbike, was shifting its focus to Europe. At the same time, North American business became less of a focus for Nextbike, and other U.S. cities that used its equipment began to close. By 2019, Pittsburgh was the only remaining Nextbike system left in the country and it was in need of an update.

“We went through a strategic planning process and did an industry survey, looking at the changing business models in shared micromobility and the larger role more municipalities were taking on,” says David White, executive director of Pittsburgh Bike Share, the nonprofit that owns and operates Healthy Ride. “Ultimately, we plotted a course to further invest in the nonprofit business model that we already had.”

Pittsburgh is one of just a handful of cities that has a nonprofit overseeing its bike share system and White knew that the decision to keep the nonprofit model would require substantial capital investment. Pittsburgh Bike Share has also been working as part of the Move PGH collective, an effort to reimagine mobility in the city — the organization knew that equity couldn’t be just a “nice to have” going forward, but rather had to be meaningfully incorporated at every step. Not only would Pittsburgh Bike Share need to choose a new provider and overhaul its equipment, but it also needed to make equity a part of its new system’s DNA.

In the end, Pittsburgh Bike Share landed on PBSC as its new provider and secured some funding from a Federal Highway Administration grant called the Congestion Mitigation and Air Quality Improvement Program, which is geared toward state transportation projects designed to reduce traffic congestion and improve air quality. The nonprofit also did a lot of fundraising locally in order to match that federal source.

“What we got is a budget that doesn’t allow us to completely replace every single station, but it gets us pretty close,” says White, noting that the new system will have a smaller footprint. “Given the state of our industry, I feel really good about what we were able to accomplish.”

The new system  — which will officially launch on May 2 — is called POGOH, as in the pogo sticks you loved bouncing around on as a kid, with an added “h” for Pittsburgh. Despite the fact that the new system won’t have as many stations, there are some undeniable wins when it comes to making it more accessible, inclusive, and sustainable.

First, almost half of the bikes in the new system are electric-assist, which allows people of all fitness levels and differently-abled riders to participate. E-bikes also provide all riders with the opportunity to go further on a bike and to ride longer, and in a hilly city like Pittsburgh, it makes biking all the more enjoyable.

“The public energy and excitement around e-bikes are intoxicating,” says White. “People who haven’t been on a bike in 20 years are already talking about a new trip they could do on an e-bike.”

Unlike some e-bike models, the new PBSC bikes don’t have a throttle or any controls — rather, they automatically adjust with the rider and are very intuitive to use. The new bikes are also lighter and smaller with 24-inch wheels (the old ones were 26), opening them up to shorter riders and youth ages 14 and up (the Healthy Ride age limit was 16). 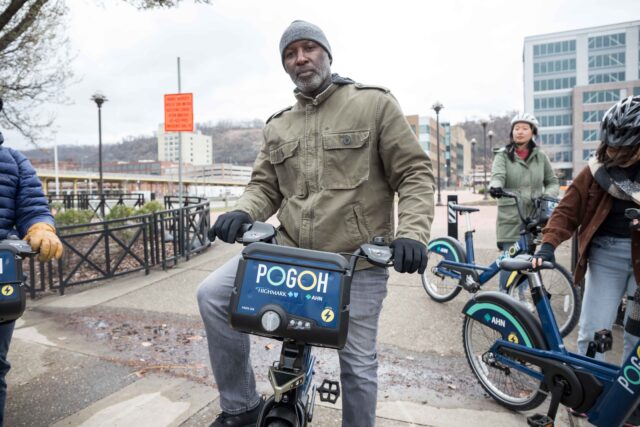 “Over the past seven years, we frequently get requests from high schoolers asking for help with a  bike club, after-school activity, bike trip, or ways to help the public school system reduce their busing — it’s been difficult up to now because of the age requirement,” says White. “The new age requirement makes the system available for all high school kids.”

The only downside to e-bikes is the cost: Since opening in 2015, Pittsburgh Bike Share has charged $2 for a 30-minute ride and the new system will charge $3.50 for 30 minutes on a pedal bike and $5 for e-assist. However, the POGOH system will also offer two new pass options: A five-hour, $20 flex pass, for folks that want to use bike share for longer excursions, and an annual $120 membership that includes unlimited 30-minute rides.

“In many mid-size markets, we don’t see that predictable use of bike share for morning and evening commutes,” says White. “Our new pricing model better reflects the different ways people use bikes.”

To ensure people aren’t left behind, POGOH will offer a Mobility Justice Membership, designed for the Pittsburgh residents who need additional transportation options the most. Available to anyone receiving any level of statewide income-qualified assistance, the membership costs $10 a year and provides access to unlimited 30-minute pedal and e-assist rides. Although there will be a one-time account creation and income verification, the whole process — which will launch with the new system in early May — has been designed to be easy. And for anyone looking to ride without a credit or debit card, there will be a Cash App workaround.

In designing its new system, Pittsburgh Bike Share relied heavily on a Community Planning Coalition in order to ensure that equity and access were prioritized. The nonprofit paid customers, community development corporations, and other interested stakeholders around $1,000 a year to participate, acknowledging the work required. Speakers — including Charles T. Brown, Olatunji Oboi Reed, and Tamika Butler — were also invited to meetings to help spark ideas and guide the group’s work. Around 40 people participated, meeting every month for the past year and a half and examining every system decision, from pricing to station siting, through an equity lens.

Although many of POGOH’s 38 stations will replace existing Healthy Ride ones, some new stations are being built in lower-income areas to attract historically underserved riders. Pittsburgh Bike Share will continue to rely on a group of neighborhood ambassadors, made up of trusted nonprofit organizations, to help amplify its goals and engage new riders. There’s also a community outreach team composed of three individuals whose main objectives this season will be to doorknock, talk to business people, and generally engage locals in conversation around the new stations, building awareness and helping people learn how to use the bikes.

Knowing that bike share won’t be a good fit for everyone, especially those located too far from a new station, Pittsburgh Bike Share is working to give away the old Healthy Ride bikes to community members who need them the most. Around 500 bikes will be revamped for personal use by stripping out heavy, now useless hardware. Eventually, the bikes will be distributed for free through different community-based organizations, with an emphasis on serving the housing insecure.

“We created an open call for requests for donations,” says White, noting that everyone from faith-based groups to schools will help distribute the old bikes. “About 99% of our bikes are going to get a second life with someone who really wants one.”

That redistribution process will be ongoing, as many Healthy Ride bikes are still in use. The new POGOH stations will start being installed on April 21, with a soft launch and the official closing of Healthy Ride stations on April 26. Come May 2, the full POGOH system will be up and running, although White doesn’t anticipate it reaching the full, 700-bike capacity until later in the year.

As the system continues to grow, one of its most important features is something no one sees: Thanks to the new e-bikes and an innovative agreement with the City of Pittsburgh, some of the new POGOH stations connect directly to the city’s electric grid. This scheme allows for the electric bikes to be charged on-site, which is not only more sustainable and cost-effective but better serves the rider. To make it happen, Pittsburgh Bike Share had to get creative, brokering a series of agreements and permits between the municipality, the city’s utility company, and PBSC.

“I feel really proud that our city leadership saw the vision and believed it was worth putting some hard effort to make it work,” says White. “The cities that are most successful in the next five years will invest in charging infrastructure that assures a customer will have a fully charged bike.”

After all, once residents try out the new e-bikes, all bets point to them being in high demand. 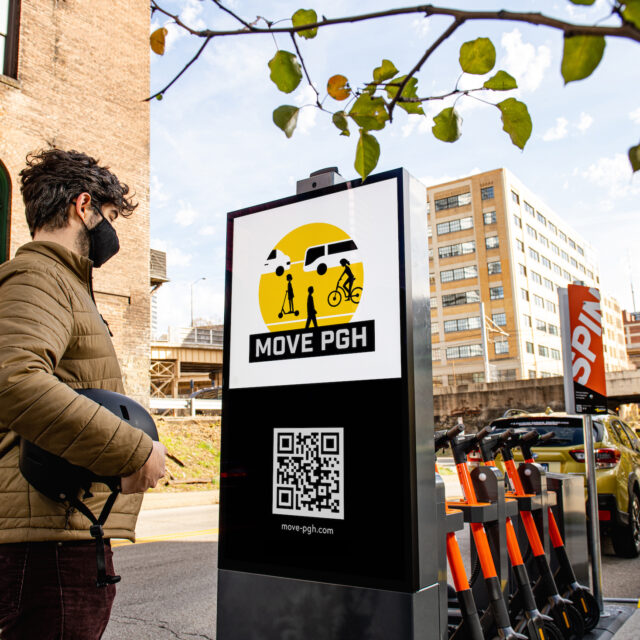 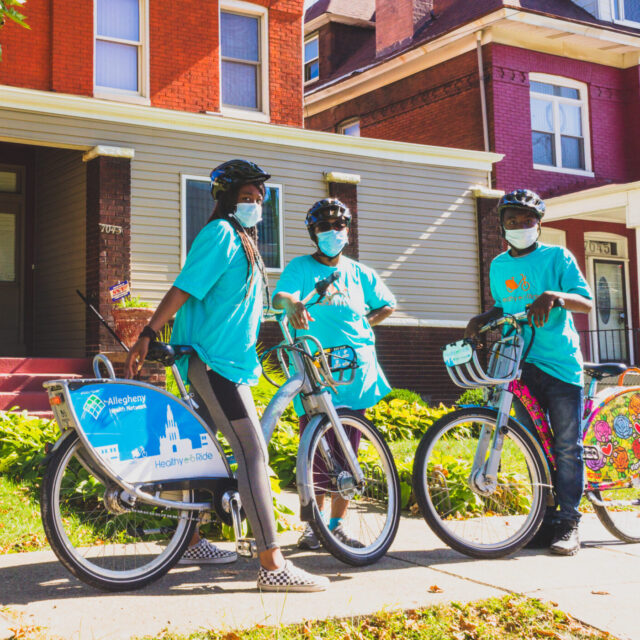 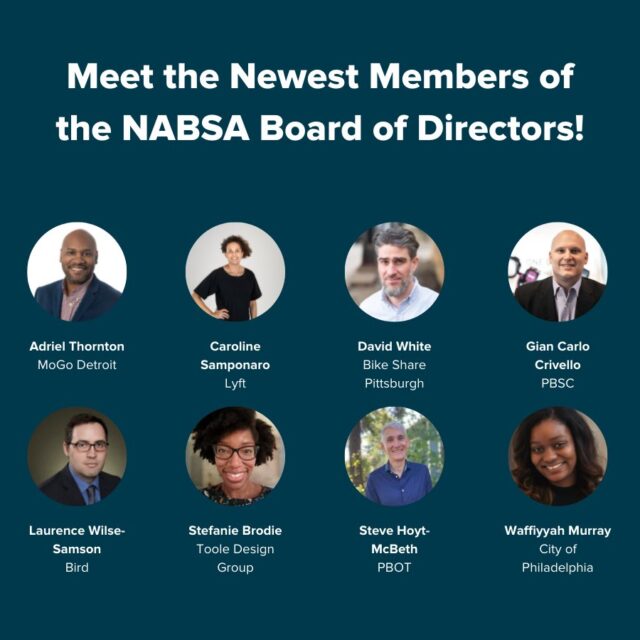