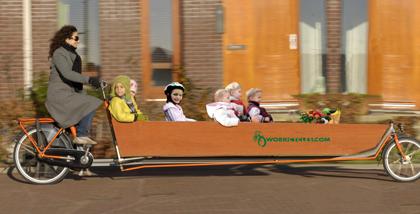 Over the past few years, bike sharing has become a familiar sight in most American cities. But despite some age diversity in who rides bike share, there’s a big segment of people who are rarely seen on the bikes — families with children.

A newly-released report from the D.C. Policy Center discusses this phenomenon, why it’s happening, and how bike share systems might be able to make their systems more accessible to families moving forward.

According to the Center, there are two main challenges that prevent families with children from easily accessing bike share. First of all, bike share systems generally have an age limit, meaning that children, for the most part, can’t check out their own bikes and ride along with adults in their company. (A notable exception to this is Fortaleza, Brazil’s Mini Bicicletar program, which provides bikes with training wheels that young children can access.)

The second challenge is that parents and guardians of very small children do not have a way to attach a bike seat or bike trailer to their rental vehicle.

Several bike share systems have lowered the rider age limit in an attempt to address the former issue. For example, last year, Philadelphia’s Indego decreased minimum rider age from 16 to 14. Potential solutions to the latter include cargo bikes and more adaptive cycles, such as those recently deployed by Detroit’s MoGo system.

Obstacles to these sorts of changes include, cost and safety (especially with regard to helmet laws). Traffic concerns can be a real issue. For example, Latina women who participated in an Indego bike share focus group expressed fear over biking in the streets with their kids, saying they have felt at risk of being in an accident, and that they have sometimes also been harassed by drivers.

While there are clearly many factors to consider, hopefully kid-friendly biking will become more of a focus for bike share systems in the years to come.