We’re back with our series to introduce the newest Better Bike Share grantees! This week is Drexel University’s research work. You can see the original post and links to all articles in the series here. 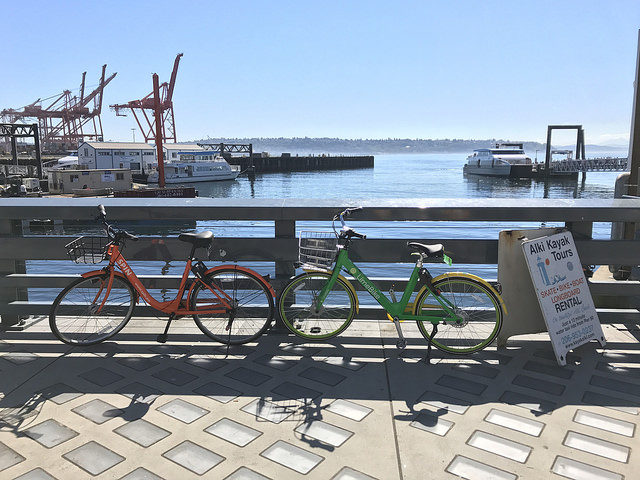 Seattle has quickly become known as ground zero for dockless bike share systems, which means now is a great time to examine how they are impacting access for a diversity of residents.

Drexel’s project looks into the spatial equity of dockless bike share in Seattle — such as whether the bikes are well-distributed and accessible to all types of residents, and what role redistribution plays in the picture. The information could help bike share stakeholders better understand the patterns and flows of the bikes and the ways in which they serve (or don’t serve) as a resource for various Seattleites.

The project is a partnership between Drexel, the City of Seattle, the University of Washington’s Washington State Transportation Center, and dockless bike share operators.

Focusing on dockless bikes in particular was an intentional choice for lead researchers Jana Hirsch of Drexel and Steve Mooney of the University of Washington. They were intrigued by the commonly-discussed issue of where to park the bikes, as well as whether the bikes had potential to improve public health. Since the bikes are a relatively new resource, the researchers were fascinated to think through the equity implications.

Looking into dockless bikes is a unique task, due to how the field is constantly shifting and changing.

“It’s a very quickly-moving field, and we are striving to move quickly as well,” said Mooney.

The data that the researchers will look at is housed at the University of Washington, which cleans and anonymizes the ridership information gathered from dockless companies.

“The data issues are complicated.  The data are of value to the company, but also of interest to researchers and the City,” said Mooney. “Each operator doesn’t want its raw data to be fully public, because then its competitors might be able to use it. The university is a neutral party who can curate the data and prepare public reports.”

One challenge of getting the data through this trickle down approach is the difficulty in verifying information. Fortunately, Hirsch and Mooney said that the University of Washington has already been doing a lot of work to make sure the data sets are as analogous as possible.

A focus on equity

One of the most important roles for Hirsch and Mooney is that they are able to focus in on a very specific aspect of the public data — equal access.

“The city is interested in host of other measures, not just equity,” said Hirsch. “We represent a way to dive much deeper into the equity piece specifically.”

The hard work begins with the first glance at the data. How, for example, do you define the population you are interested in examining for equity concerns? Or which neighborhoods do you look to as target locations for bike share bikes?

Additionally, Hirsch said it is important not to forget about other factors of equity, such as overall cost of the bike rides. The researchers are examining the results of an individual survey conducted by Seattle DOT and several bike companies in order to understand some of the other barriers that residents face.

The researchers are also keeping in mind some of the composite measures that the City has developed to look at poverty and economic opportunity, including the Displacement Risk Index and the Access to Opportunity Index.

While the multiple stakeholders (private, public, academic) can make coordination challenging, the researchers have met with lots of interest and cooperation so far on all sides.