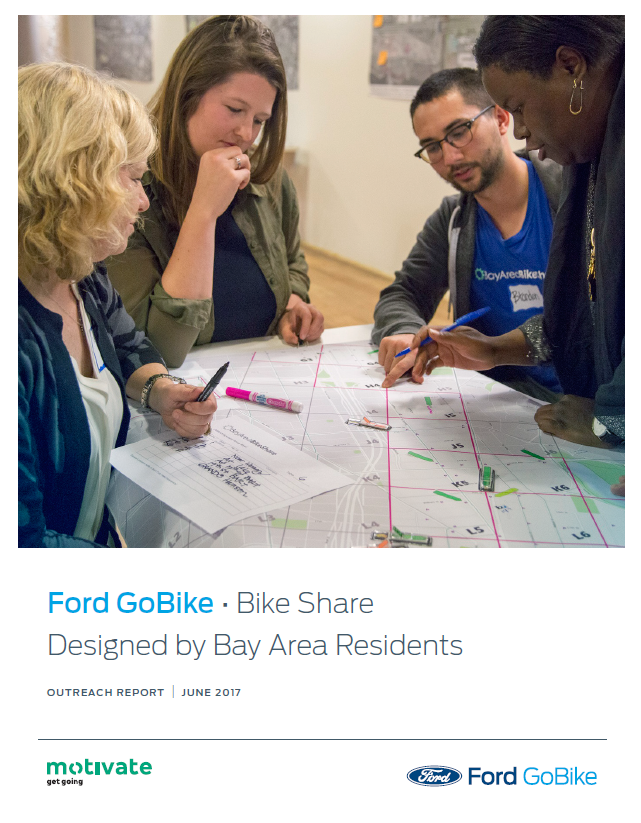 This is the second of two posts to explore the partnership surrounding the launch of Ford GoBikes in the East Bay of the San Francisco Bay Area.

Strong operator and city leadership, as well as dedication to the community process, makes for a more equitable bike share. At least that’s what partners in the San Francisco Bay Area seem to be finding.

Oakland is seeing its first ever bike share system under the rebranding and expansion of the San Francisco Bay Area’s bike share system, now known as Ford GoBike. The robust equity measures featured in the system are the result of communication and collaboration across multiple sectors. Local nonprofits play an important advocacy role, as do those managing the bike share system itself, including the operator and city government entities.

To prepare for launching Ford GoBike, the system operator, Motivate, held 30 public planning workshops and 300 stakeholder meetings over the course of 18 months. Much of the time during these meetings was spent discussing siting for the new stations — a process that involved coordination with city governments as well.

“It was constant coordination and communication between ourselves, neighborhood groups, and the city,” says Paolo Cosulich-Schwartz, Outreach and Communications Manager at Motivate. Motivate compiled learnings from the many meetings into an outreach report.

“We heard a lot of concerns around access,” says Cosulich-Schwartz. “People were interested in expanding the service area, making sure it serves a larger area.”

The station siting process also involved reaching out to the local businesses that would have a station by their store.

“We went out to the businesses and residences that would have stations in front of them, and did door-to-door outreach at hundreds of locations,” says Cosulich-Schwartz. “As an informal policy, we’re not putting them in front of businesses that don’t want them.”

The reasons for having such an in-depth outreach process are apparent when looking at the few cases where businesses fell through the cracks. Recently, Mistah Fab, a black Oakland business owner was unhappy to find a Ford GoBike station outside of his business. He says he was not consulted beforehand, and was concerned about the loss of parking for his customers. The station has since been removed until further discussions take place.

“With small businesses in particular it is tough to connect to the right person,” says Cosulich-Schwartz. “With this situation in particular, we were not able to connect with the business owner. With over 500 stations, we’re going to make mistakes. Our commitment is to respond to and fix those mistakes as quickly as possible.”

He notes that there were also residents near the station who were excited about the bike share station coming in, and that the conversation will continue. “We’ll be back in August to have a broader conversation with neighbors and businesses to talk about where the station would make sense.”

Oakland isn’t the only place where controversy over station siting has happened. In San Francisco’s Mission District, one entire business district opted out of bike share, due to concerns that it would cater to visitors, rather than longtime Latino residents.

One of the strong mechanisms for creating equity with bike share was through the $5 discounted annual membership for low-income riders. The discount is offered through the Bike Share for All program.

“From the beginning when I started with Motivate in late 2015, we had contract requirement to do a $5 per month ($60 for the first year) membership,” says Cosulich-Schwartz. “We worked with cities and MTC [Metropolitan Transportation Commission] in making it stronger and expanding access for that.”

By the end of 2016, through working with MTC, Motivate was able to offer the low rate of $5 for the first year.

Cash payments through the public library

Another important membership option offered is the ability to pay with cash. The City of Oakland was instrumental in putting that component together along with the Oakland Public Library system.

The impetus came from looking to other cities where known barriers to bike share have been documented; such as cost, not wanting to connect a membership to a credit or debit card, and not being a part of the formal banking system.

Then it came time to figure out where a cash payment system could be set up.

“We thought, what is the most hyper-local location that already does social services and that promotes bicycles?” says Carlos Hernandez, a transportation planner with the City of Oakland.

“Public libraries are already a gathering place for people, particularly people of low income,” he says. “They are distributed throughout the city fairly evenly, and they’ve been there forever. They’re staples in the community for finding out about events, educational resources, and more. We knew bike share would make sense.”

He says getting the program going required a lot of collaboration, both with advocates among library staff, Motivate, and community groups. While there were still details to hammer out by the launch date, the overall goal is to improve accessibility to bike share without creating an extra burden for library staff.

There are also staffed bike share stations (two in Oakland and one in Berkeley) that provide additional options to sign up for bike share with cash.

Hernandez says he would love for the system to get to the point where it could serve as an example to other cities looking to set up cash payments.

“It takes a lot of work,” he says. “You have to have staff willing to put in that work. Our advocates put in work all the time. We have to match where they’re at […] We have to work with community groups and trust them.”