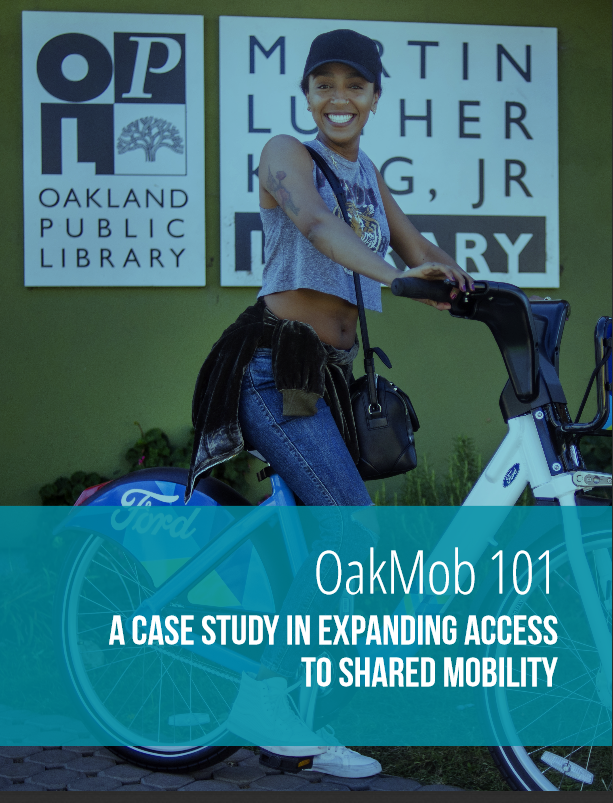 This is the first of two posts covering partnership work around the Ford GoBike system in the San Francisco Bay Area.

The Bay Area’s $5 discounted bike share membership didn’t just arrive out of thin air. The equity measure was driven by a suite of partners, including nonprofit advocates and community-based groups.

The Bay Area as a whole is moving to a landmark 7,000 bike share bikes, under its new system, Ford GoBike. The East Bay subsection, including Oakland, Berkeley, and Emeryville, saw its first-ever bike share stations under the expansion, beginning with 450 bikes and 43 stations.

In the East Bay, equity measures include the discounted membership for low-income residents, the ability to pay for a bike share membership using cash, extended ride time (up to 60 minutes for discounted memberships), integration with the Clipper regional fare card, and a pilot program offering adaptive bikes for people with disabilities.

There has also been $260,000 in funding set aside collectively from Motivate and MTC (Metropolitan Transportation Commission) for community-based engagement and the hiring of local residents as street ambassadors. This aspect in particular is one that community advocacy nonprofits have taken ownership of in partnership with those managing the bike share program directly.

The power of multi-sectoral partnerships

Two of the most active nonprofit advocates for bike share equity in the East Bay are Brytanee Brown, a community planner at transportation advocacy nonprofit TransForm and Cynthia Armour, a former advocacy manager at Bike East Bay. (Armour left her position prior to the publication of this post.)

Brown and Armour are quick to note that the strong provisions for low-income bike share riders have much to do with partnership. Each organization involved played a role in moving the work forward.

“The $5 memberships, I don’t think would have happened if Motivate hadn’t rolled [them] out in other cities,” says Armour. (See Chicago’s program for instance.) She notes that Motivate’s track record of offering such discounts made it much easier for them to do the same in the Bay Area.

Community efforts will focus on youth

Along the way it’s been important to East Bay nonprofits to work with youth. A strong track record with youth was part of the reason why The Original Scraper Bike Team and Cycles of Change were selected as the local community partners for bike share.

“Each CBO [community-based organization] will hire ambassadors,” says Brown, discussing what the outreach role of the community nonprofits will be.

“We’re pretty excited about the groups that we’re partnering with and the people we’re bringing on board,” says Armour. “We are very much focused on working with youth, and the Original Scraper Bike Team and Cycles of Change are committed to inspiring local youth with structure and community.”

Gentrification and affordability have to be on the table

One of the most intense debates in the East Bay at the moment is the issue of housing affordability and related concerns over gentrification. Brown and Armour believe that those fears have to be discussed and meaningfully addressed in order for bike share to be embraced by low-income individuals and people of color.

“There are people who have lived here for a very long time who have been denied mobility,” says Brown. “We have to understand that, recognize that, and, as we move forward, make sure we’re not repeating history.”

That’s why it was important to Brown that community outreach happened in the form of OakMob 101, a community engagement and learning session about bike sharing and car sharing in Oakland. Recommendations that arose from OakMob were compiled into a report that highlights current health disparities, as well as the risks and benefits of sharing programs for target communities.

Brown and Armour say they have to keep these concerns in mind when moving forward with their work.

Above all, build a system people want to use

Brown and Armour note that the Bay Area is just in the beginning phases of the outreach process. But there are still some emerging big picture questions that they’ve seen so far.

“The questions we need to ask are, ‘How do we make sure this system is of value to people?’ and ‘What makes this system accessible and great for people,’” says Brown. “The agency and the company need to make it accessible, make it viable, make it convenient, and all that [outreach] work will follow.”

“We tried as much as possible to have everybody at the table, even though we all have different campaigns,” says Armour. “It’s a question of speaking to as many stakeholders as possible, and finding a way to work with them.”

Both Armour and Brown hope to see the reach of the bike share system expand further into low-income communities in the future (such as deeper into East Oakland) as the program develops.