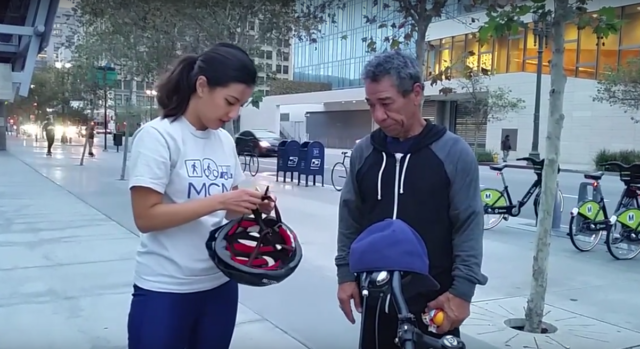 The region of cars now seeks to develop an equitable bike share system, and there’s a plan for how to do it.

The actions that stakeholders in LA are taking to plan for equity thus far can be summed up as three coordinated approaches: collaboration, integration, and engagement.

LA Metro depends in part on collaborations with community-based groups to move forward with its equity goals.

MCM and LACBC met with LA Metro and the Los Angeles Department of Transportation last week at an equity retreat for the organizations. The retreat and additional collaborative work are funded by the Better Bike Share Partnership.

“It’s such a great opportunity that we can even have it,” says Avital Shavit, Transportation Planning Manager with LA Metro. “An equity retreat is the idea to really start discussing how we become the most inclusive and the most accessible bike share system.”

MCM and LACBC are excited about the potential to work together as well. “We’ve never had retreats like this,” says Rio Contreras, Active Transportation Project Coordinator at MCM. “It’s really powerful to see what impact this is having on our partnerships. There was an openness on their behalf, and an openness on our behalf to come together.”

“The funder really helped get folks invested in the game,” says Tamika Butler, Executive Director of LACBC. “It helps when there aren’t a ton of resources.”

Shavit sees great potential in the partnership with community-based organizations when it comes to preparing for equity. “We’re excited to be working with MCM and LACBC to figure out what bike share equity looks like for Los Angeles,” she says. “We want to learn lessons from the Downtown LA pilot and apply them to the rest of the county.”

One of the unique aspects of the LA Metro bike share system is that equity will hopefully end up being baked into the transit fare card itself, known as the Tap card.

Shavit says that the main reason why focusing on the Tap card is important comes down to ease of use. “The easier it is to use a system, the more people are going to ride it.”

In addition, the integrated fare card can serve as a mechanism for equity goals. LA Metro hopes to piggyback off of existing low-income transit rider programs, such as the Rider Relief program, by making them accessible to bike share users as well. The reasoning is that people who need help paying for transit probably also need help paying for bike share. The existing programs provide an automated way to bring current transit riders into the bike share system.

Shavit also understands, however, that not all of LA Metro bike share users may be banked or interested in giving out their debit or credit card information. As such, LA Metro is looking at the “long-term” possibility of providing a cash-based system option as well.

Community engagement and visibility will be important to bike share’s success in LA’s diverse neighborhoods.

“We’re just beginning to work on the street outreach,” says Contreras. “We started to come up with culturally relevant materials. We have to make it relevant to our communities.” Contreras and Butlers’ organizations led a community-based bike share ride several weeks ago. They’re also not afraid to get creative when it comes to culturally-relevant community rides, hosting a Day of the Dead themed bike ride, for example.

Part of the reason why it’s important to get out in the community has to do with the way that bike share is perceived and talked about — a topic close to Butler’s heart.

Butler emphasizes the need to broaden the picture of who can use bike share. “Overwhelmingly people are really positive about it. But they think it’s for someone else. The question is how do you go from something that doesn’t feel like it’s for anyone and get it to a point where a lot of people see it as for them?”

Butler also emphasizes the newness of the LA Metro bike share system and the learning opportunities it can provide. She stresses that the process of creating an extensive and equitable system is work done throughout months and years, not weeks. “We only launched in July. People are still figuring it out. We’ve got to give it some time.”