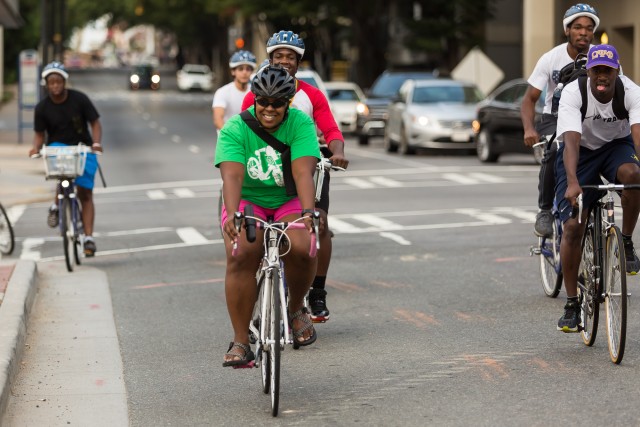 In 2012, Dianna Ward was a small business owner with a math degree and 15 years of work in applied statistics who happened to commute by bike.

Four years later, she’s become one of the longest-serving bike share system directors in the country, and one of the few people of color among bike sharing executives. She’s also board secretary for the North American Bike-share Association, and continues to moonlight as owner of a Segway tour company that has expanded from her home base of Charlotte, N.C., to Greenville, S.C., Kansas City, Mo., and Chattanooga, Tenn.

Ward is also frank, outspoken and solution-oriented about diversity problems in the bike share industry.

We caught the fast-whirring executive director of Charlotte B-Cycle for a phone conversation last week about her approach to recruiting; the crucial difference between “charity” and “equity”; and the ultimate deadline that bike share systems face for connecting with more of the subcultures that make up their communities.

How do you feel about hiring and professional development for people of color in the bike sharing industry?

The people involved in bike share tend to be more on the open-to-diversity-and-inclusion side. That’s the awesome piece. The not so good piece is that it hasn’t happened.

Why do you think that is?

I think the challenges are the same challenges that most companies struggle with: trying to find talent, and competing for talent.

I see people trying to make excuses for why there aren’t more people of color in these positions. I’m like, You know what, I’m a pretty strong leader and I don’t have a bicycle background.

I think that a lot of bike share people are trying to pick transportation folks in a lot of these cities, or bike advocates, instead of saying, “We need someone who will be able to represent us, raise money.”

I happen to own a Segway tour business. I was a bike commuter, but I was not “bike bike bike bike bike.” But what I did was have a passion for this city, and I’m a very strong business leader. So my skill set translated. We have to stop making up these criteria. People think you’re running a bike shop, or you make it seem so aloof.

You might find that by branching out and providing fewer “must-haves” and really just honing in on: What is the skill set? What is the description of a great bike-share leader? Starting there and then finding people who meet this criteria. Even if they own an auto shop.

My first hire was an air-conditioning repair person. He was good with a wrench, he was punctual, he was neat and he was customer-focused. That’s all that mattered to me. I didn’t care whether he had ever worked on a bike or not.

I was looking for somebody to do customer service for me and I ended up hiring someone who was a recent graduate in economics but had a golden personality and an attention to detail. I knew she could do the job even though she’d never ridden a bike before.

The reason that they don’t have more people like myself in top positions is because they’re not trying. They don’t even realize that they’re doing it. If you want a different outcome, you need to do different things than what you’re doing.

When a bike share organization lacks people of color in leadership, how does that shape its operations?

If there’s no diversity, then their team is missing out on something.

Are we going out in the community and meeting people who are different than us? I find that people that I talk to have a very condescending tone when they talk about outreach. Like, We need to go find some poor black people to help — with bike share. I haven’t met anybody yet that I think would do anything intentionally [racist]. But when you treat one community that they should be the constant recipient of your goodwill…

We have to put on a lens and say, It’s not charity, it’s equity. And It’s not them, it’s me. I’m the person who doesn’t have the ability to recruit diverse talent. And then you know what, things change.

Before bike share, there were lots of people in Charlotte riding bikes. But because they didn’t have the right gear and the right backpacks — it’s not a “cycling community” until the white people are cycling.

What are you doing at Charlotte B-Cycle to recruit diverse staff?

In a week we are doing our “back to school ride” where we work with a historically black college in town — we work with 100 women. This isn’t going and saying “I’m going to offload a $10 an hour job.” That can’t be the extent of what you do. Some of those job training programs are excellent, but it can’t stop there.

If you go into a place with black professionals, how are you going to react? I attend functions and talk about bike share even when there isn’t a connection. Because that’s how you expand the tent. I haven’t talked to anybody who’s doing that kind of stuff except for us.

If somebody says tomorrow I need to go to a mosque or go to a synogogue, I am prepared to go there, learn about the organization and find a way to connect and support them. That’s how relationship-building starts. And then it’s easy for me to pick up the phone and say, Hey, I need to fill X role. do you know somebody who’d be interested in this job?

How do you think an organization knows it’s succeeding on this front? What would that look like?

You have unexpected people promoting bike share. And you don’t feel like you’re pushing a rope or herding cats.

I’ve got a group of young black professionals on the west side who came up with a ride. You’re talking about people who are dentists and doctors and attorneys. They’re in an investment group, buying land in a historically black part of town — they’re putting on an ice cream ride.

Have your views of these challenges developed over time, or did you basically know you were getting into them when you started?

When I came into bike share, there were only a couple of bike shares. I already owned a tour company; I knew coming in that there was going to be a big public relations job.  I did not expect some of what I experienced.

On the positive side, I will tell you that I’ve worked for the head of the downtown association here, and he’s been great since the day he asked me if I was interested in running this. He has been super supportive. But I do think that cycling already has this “individual contributor” feel to it. A lot of cyclists ride by themselves. I don’t necessarily think that in their minds, cyclists look like me.

We were in the process of developing NABSA. And I had two people ask me if I rode a bike. We were out on a bike tour of Denver, and somebody asked me, “Do you ride a bike?”

We’re hiring right now ourselves for an equity writer, who’ll largely be covering bike sharing. Got any advice for us on that?

If I went out and polled my friends today and asked if they wanted to write on “equity,” they wouldn’t have any idea what I’m talking about. When you use words like that, “we’re looking for an equity writer,” it always comes across as some kind of affirmative action.

While we’re talking, any general advice on outreach to communities of color?

Bike share has an image issue. People have not necessarily seen themselves in bike share. I think there are still people in this city who are white or black or whatever who don’t know what bike share is. I have to always go, “You know the bikes? The bike kiosks? The bikes that are on the street?”

We’re trying to use the same tools that we use for Middle America on communities of color and it’s just not working. I have a friend who’s editor of the local African-American magazine. We’ve got three black publications in town. Three! How do you work with those types of folks to get the articles you’re looking for?

Social media is important. How do you get to the social media sites that communities of color use? It’s not that we’re stupid, we just don’t go to the same stuff. We’ve always been segregated! We don’t do the same things all the time! In a lot of things we’re segregated on a daily basis. so it shouldn’t be a shock that when we go to find people I have to find out where they find out. Same thing with the Latino community. Don’t just roll up with your same tools not speaking Spanish.

At some point the newness of bike share is going to rub off, and you’re going to need the support of all the communities to maintain bike share and keep it going.