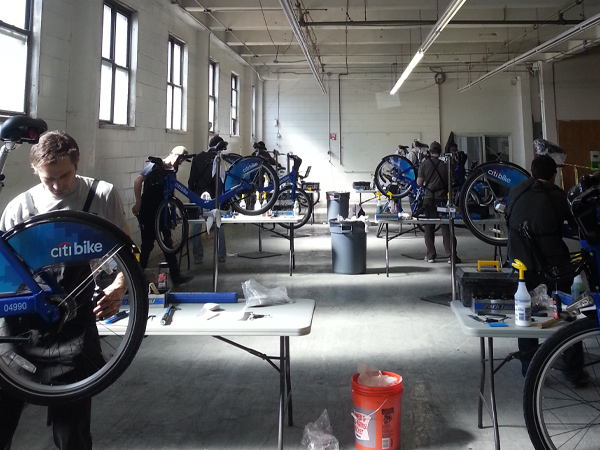 Hiring minorities is nothing to celebrate if they don’t have a voice.

Bike shares are increasingly striving for diversity, not just in their ridership but also on their staffs. Several systems have embraced partnering with workforce development programs to hire bike mechanics and re-balancers, and some have even codified those goals into their contracts.

Such efforts are easy, effective ways for bike share systems to incorporate equity into their operations, and everyone is happy when jobs are being created. However, it is potentially problematic if all of the diversity within a bike share operation is concentrated into the department that is most physically demanding and least influential to the big-picture vision of bike share.

This is one reason why the industry trend toward unionization is important.

Next City reported that bike share workers in Jersey City recently voted 8-3 to join the Transport Workers Union Local 100. This makes them the fifth bike share system in the United States to unionize. Next City explains the benefits:

[TWU Local 100 Director of Education Nicholas] Bedell says the safety language is mostly to address concerns re-balancers raised about being on the street in the dark moving bikes around at docking stations. The contract gives workers an official path to raise safety concerns. Schedules are now set three months in advance to help people predictably schedule their lives around work. New York and Boston staff got $1.50 per hour raises across the board. Because of federal contracting standards, the D.C. staff was already making good wages. The other major contract highlight: It creates an elected workers’ council that meets with management to address operational issues.

Bedell goes on to say that “five is just the beginning” and TWU plans to expand its network of unionized bike share systems. Such a movement doesn’t just ensure livable wages for employees, it has the potential to elevate new voices that the bike share industry desperately wants—and needs—to hear.