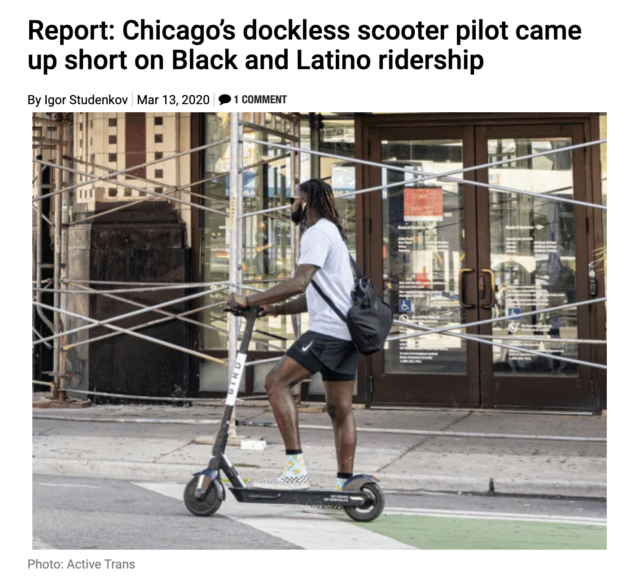 In March, Streetsblog Chicago reported on a study capturing the results of the dockless e-scooter pilot that ran in the city in 2019, and the results didn’t exactly reach the goal.

Between June 15, 2019 and October 15, 2019, Chicago’s pilot permitted licenses to 10 companies to operate in the city to improve mobility in Black and Latino communities on the city’s West and Northwest sides.

The study, titled “Vroom or Bust: Towards a Chicago E-scooter Strategy in 2020 and Beyond,” was conducted by Samuel Kling, a public fellow at the Chicago Council on Global Affairs public policy think tank. Here’s how it went:

According to Streetsblog, each company was allowed to deploy 250 vehicles, for a total of 2,500. The pilot required e-scooter vendors to do outreach to educate residents about the ins and out of renting and riding e-scooters. Additionally, Chicago designated two priority areas with few or no Divvy bike-share stations, where the companies were required to place a total of 50 percent of their fleets each day.

Priority Area 1: Most of the Northwest Side’s majority-Latino neighborhoods such as Belmont Cragin and Hermosa, as well as portions of Austin north of Chicago Avenue. While Austin is a majority-Black community area overall, that portion includes the racially diverse Galewood neighborhood, and North Austin’s increasingly Latino northeastern edge.

Altogether the 2,500 scooters saw an average of about 7,000 rides a day, or about three trips per device. That’s a higher rides-per-vehicle rate than Divvy typically averages. A few bus routes within the pilot area see less than 7,000 customers a day. However, only 14.7 percent of all e-scooter trips took place within the priority zones.

“Kling noted that about half of the trips began or ended near a transit stop, but added that the data doesn’t make it clear whether the riders took the e-scooters to or from a train or bus, or if they simply made a trip that would have otherwise made using public transportation with an e-scooter,” writes Streetsblog writer Igor Studenkov.

This an important distinction to highlight because e-scooters are often deemed as a “first/last mile” solution for transit commutes.

“Affordable, accessible micromobility holds promise for low-income residents living in transit-deprived areas. As such, improving access and ensuring affordability should remain a priority for e-scooters. At the same time, Chicago must continue to expand access to the Divvy program, which remains sparse and little-used on the South and West Sides, and can serve different types of trips, and different populations, than e-scooters. Building public buy-in through outreach and engagement in these neighborhoods should be a top priority.”