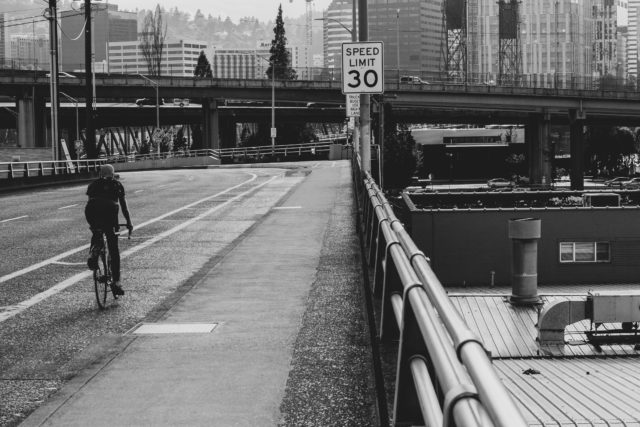 Infrastructure and bike share go hand-in-hand: how can you ride safely without clean, paved roads supporting your journey along the way? Despite what some may think, traffic safety is an environmental justice issue.

The alarming problem of pothole inequality is faced by a disproportionate number of communities of color and lower-income communities, leaving residents feeling invisible and forgotten as they’re forced to navigate roads in horrifying conditions. In an article discussing the rampant potholes in Oakland, California, Itzel Diaz-Romo of community group Unity Council believes bad roads are a symbol: “It’s just a constant reminder of, ‘Oh, of course, this is a poor neighborhood. We’re low-priority when it comes to fixing this stuff,’” she said.

Tamika Butler, Esq., Planner and Director of Equity at Toole Design, weighed in on the topic, sharing that, “When you take data of race and socioeconomic status and you overlay it with where there are the most traffic incidents, and the most traffic deaths and serious injuries, communities of color and low-income communities light up those maps.”

Previously, we shared a PSU research study that revealed 48% of its respondents said traffic safety fears are the number one deterrent and barrier to bicycling. And in 2012, the American Journal of Public Health conducted a study in Montreal that highlighted a truth we already know: Due to disparities in roadway environment in poor and rich areas, there were significantly more injured pedestrians, cyclists, and motor vehicle occupants at intersections in lower-income communities

Yet, in a new decade, the issues of poor infrastructure are far from being resolved. This startling fact isn’t a mystery to residents, though, since a mere 12-year-old took it upon himself to resolve this dangerous problem in his Michigan community upon realizing the city wouldn’t.

Cyclists and pedestrians faced with this dilemma are left with few choices to solve the problem — one they didn’t create in the first place. However, in his article How to Photograph a Pothole: A Guide to Illustrating Your Advocacy, Drew Ross offers a unique perspective.

It’s your city government’s job to ensure equitable traffic safety for all residents, but since that isn’t always the case, you can empower yourself with pictures to prompt some action.

With a background in journalism and photography, Ross knows photos are an effective way to raise interest and support. “A photograph conveys a lot of information: perspective, proportions, scope, and emotion. So I set out to get some photos for our presentation. The pictures below are some examples of photographs I took to support our initiative and communicate the scope of this issue to local politicians,” he writes.

Ross outlined the best ways to capture a pothole:

1. Outline the hazardous potholes to accentuate its perimeter 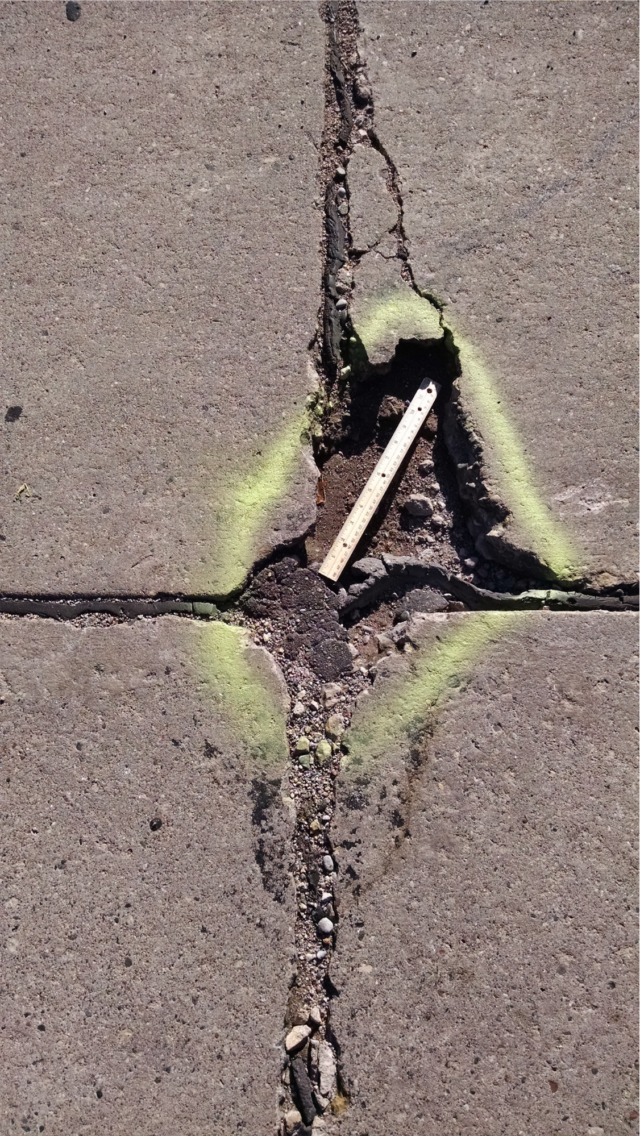 2. Use props to illustrate the size and width 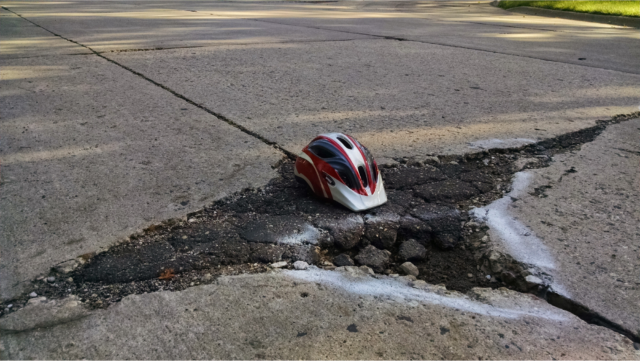 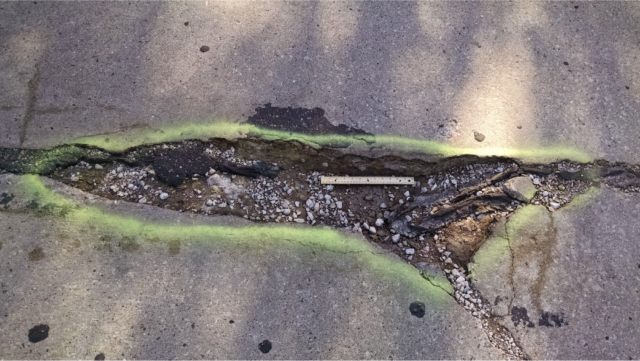 To do this, Ross used a helmet and a ruler to help readers grasp the depth and size of the pothole. Without these items, it might be easy to look at these images and assume cyclists can simply ride over the potholes with no repercussions.

3. Lastly, angles are everything 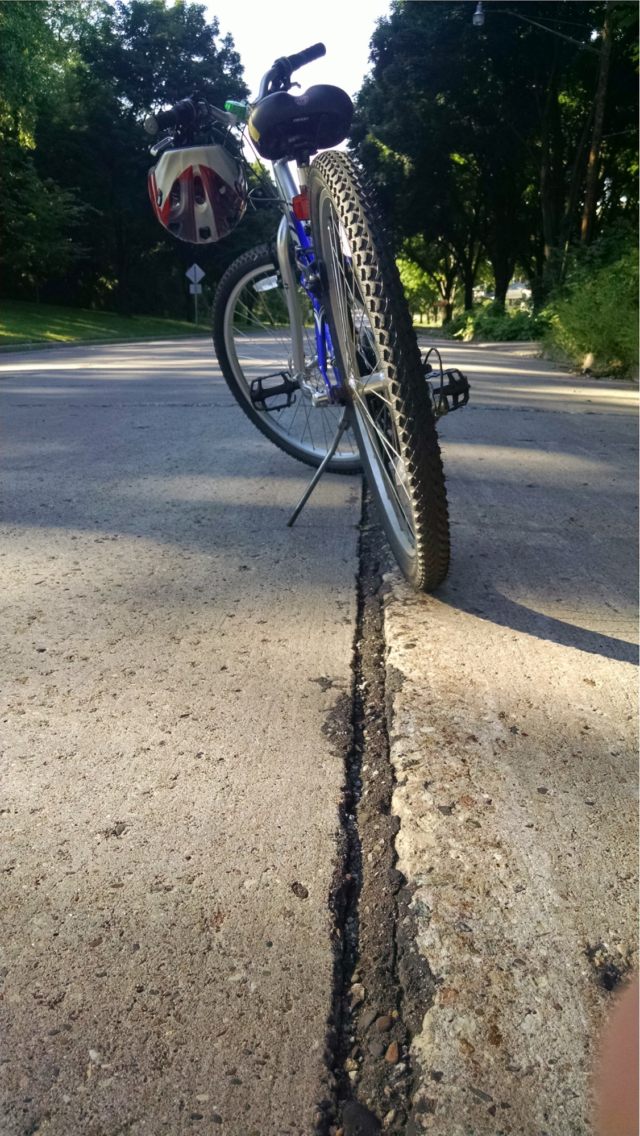 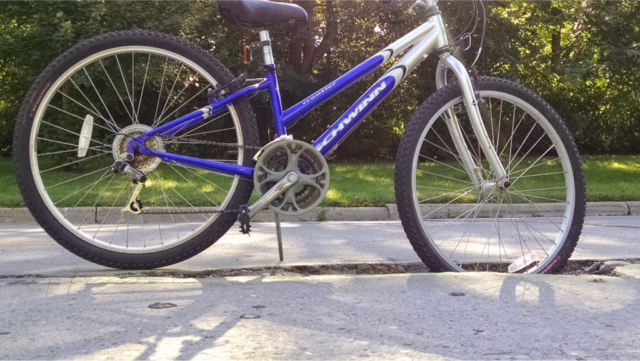 Get creative to exhibit your perspective of getting to see the pothole in person versus through a photo. Ross does this a couple of ways, first by placing the bikes’ tire near tire-grabbing seams to show the impending dangers.

The second way he uses angles to his advantage is by getting down on the street level to capture the pothole, “which allowed the bike wheel to act as a metric for the depth of the pothole. A soft backlight brings the shadow to the viewer.”

Pretty simple, right? Once you’ve got your photos, don’t hesitate to share them far and wide! Shining a light on the truths of inequity is necessary.

Streetsblog USA’s Kea Wilson said it best: “Follow your city’s official process for reporting roadway hazards, then tag that councilperson of yours on Twitter, too. Don’t be afraid of making noise and demanding the safe roadway you deserve.”