The latest NACTO analysis shows a strong increase in trips taken via micromobility, mainly due to the use of scooter and dockless bike sharing systems. 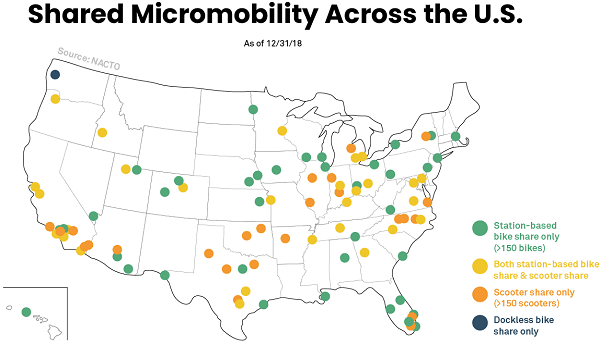 Traditional bike sharing companies still play a big role in the micromobility scene, accounting for about half of all trips in 2018. Several station-based systems expanded their number of bikes for a total increase of 9% across the U.S. The vast majority of these bikes are in New York, D.C., Chicago, the Bay Area, Boston, and Honolulu.

In the realm of dockless bike share, e-bikes are the name of the game, with many fewer pedal-only bikes still in circulation. E-bikes overall accounted for 6.5 million trips in 2018, including both docked and dockless systems. Ride-share companies Uber and Lyft both made moves, acquiring JUMP bikes and Motivate, respectively.

E-scooters are the newest micromobility option on the market, accounting for 38.5 million trips. Scooters first appeared in cities such as Santa Monica and Austin, spreading rapidly from there.

NACTO’s report further breaks down 2018 bike share trips by trips per hour, trips per day, and reasons for riding, among other factors. In addition, the organization highlights questions of system dependability and future legislation relevant to micromobility.