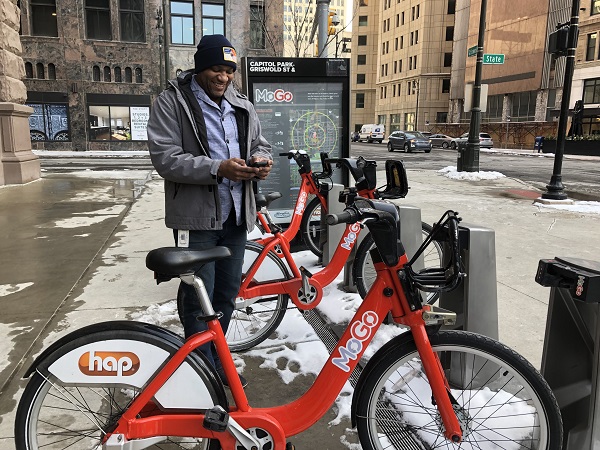 Bike share marketing and outreach strategies are a consistent growth area for systems across the country. In Detroit, operator MoGo is texting its way to member inclusion.

MoGo has been experimenting with third-party system Textmunication. Under its current plan, the service allows MoGo to send 4,000 texts a month, which the bike share operator has used for both communications and research purposes.

On the marketing side, MoGo employs the texting service to let members know about promos and discounts, in conjunction with traditional email  communications.

Marketing uses through texts have included gift card sales, various other promo codes, and notices of specially-wrapped winter bikes released into the system.

The texting service has also been a promising new tool for gathering information about member preferences, patterns, and perceptions. In August, MoGo used the text message system to send a survey to a subset of the 250 people who activated their MoGo DDOT Pass, in order to learn more about what they thought of the service in their 30-day trial. The operator wanted to know if participants would consider purchasing a MoGo pass in the future.

While MoGo had previously sent out personalized emails to these individuals with a link to the survey, it received no responses, as well as notices for many defunct emails. When it sent out a text message to the same group of people, MoGo saw approximately 15-20 responses in the first day alone.

User surveys are notoriously hard to gain responses for, so the promising numbers from Detroit might be food for thought among other systems. Texting the surveys has been particularly helpful in hearing from those without computer access or email accounts, who are disproportionately from underserved populations.

MoGo has already figured out some of the best ways to take advantage of the texting system. One important factor is knowing how to inform members without pestering them.

“We wouldn’t send a message that impacts the same group of people more than every two weeks,” said Rory Lincoln, Director of Programming and Operations with MoGo. “And once someone opts out of the message system, they can no longer be contacted.” The phone numbers are managed through a master CSV file that is uploaded into the system.

It’s also important, he said, to make sure that information about text communications is included in the user agreement and/or privacy policy.

In considering text communications, Lincoln recommended that systems explore: “Find out what marketing tactics are user friendly and really appeal to the member base.” MoGo still finds newsletters useful for reaching a wider audience base, for example, and for times when a message exceeds the text service character limit.