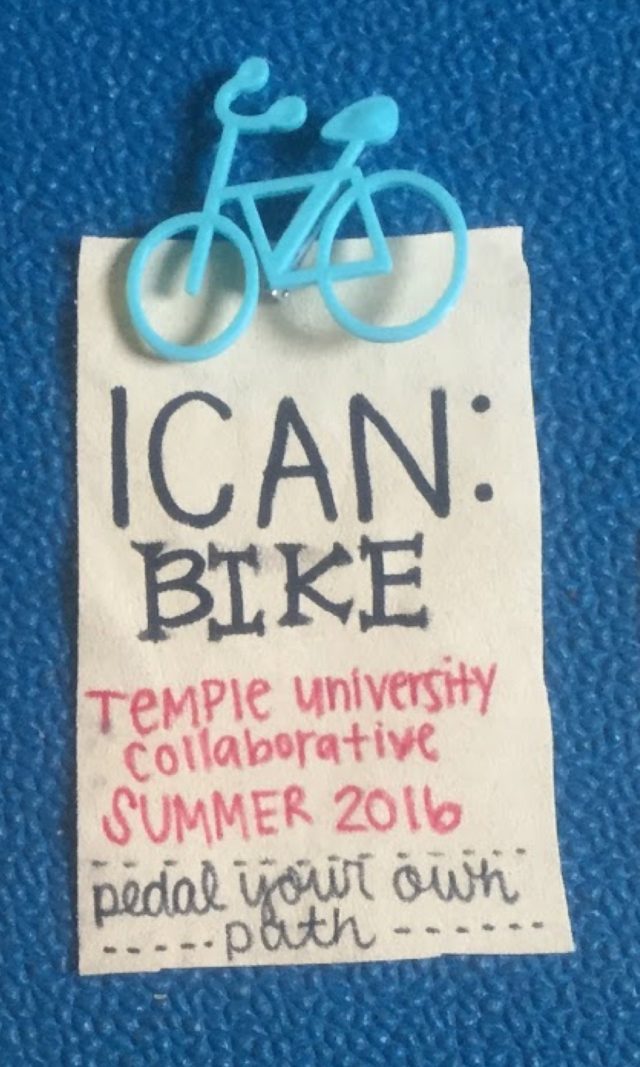 It’s no secret that access to bike share can help improve physical health and mobility options, but now it is also being used as a component of mental health care.

Take for example the story of Scott Walters, who lives in Minneapolis with a psychiatric disability. Walters, whose name has been changed to protect his privacy, had intense anxiety about being inside an automobile. He wouldn’t enter a car or bus, so he was essentially restricted to carry out life within walking distance of his home. He struggled with homelessness and a number of health challenges, such as diabetes.

However, once he obtained a bike share membership, Walters took quickly to the system, racking up 433 rentals from June to October of 2016 alone, in a total of 84 hours and 7 minutes of ride time. While his situation might be an outlier in sheer number of rides, it nonetheless shows how bike share can open up the city to those for whom it was otherwise inaccessible.

Walters was a member of an innovative program that brings the Nice Ride Minnesota bike share system to clients struggling with mental illness.

Tina Cho, Access Manager for Nice Ride, approaches the work by drawing on her exercise physiology background and past experience as a high school rowing coach. There, she saw firsthand the strong connection between physical activity and mental health.

“Mental health challenges have stigma because you can’t see it,” says Cho. “But at the same time, well frankly, the stronger your body is the less crappy you’re going to feel overall.”

Cho was approached by the cardiovascular disease prevention program at Hennepin County Medical Center (HCMC) and asked if there was a way to connect the bike share program to their client base.

“They started by saying they’re trying to approach medicine and treatment from a holistic approach across the board,” says Cho. “It’s difficult to prescribe exercise, but it is possible. Bike share has a built-in tracking system for whether you actually exercised [compared to a gym pass].” Fortunately, there is a Nice Ride station right across from HCMC, providing a great opportunity to put theory into practice.

HCMC offers group classes, one-on-one therapy, and other mental health services. Amber Courtney is an occupational therapist at HCMC who helps manage the Nice Ride collaboration. She explains, “We really wanted something where people had the flexibility that Nice Ride offers. Our clients have severe and persistent mental health challenges. The maintenance of owning their own bike is too much. But people were excited about biking.”

Among the other challenges that HCMC’s clients deal with, a disproportionate number are low-income.

Courtney shares how bike share has assisted many of her clients. For example, one of her clients was able to access a gym for the first time with bike share. The gym gave the client a safe place to be during the day, as well as access to social connection and physical activity. The client now serves as a liaison between the YMCA and day treatment programs.

Cho also collaborates with the Native American Community Clinic, where she says the bikes help with tobacco cessation programs. Participants who want to smoke on their activity breaks are able to go for a bike ride instead.

This sort of innovative partnership between bike share and mental health providers is happening in more than just one part of the country.

Gretchen Snethen is Assistant Professor in the Department of Rehabilitative Services at Temple University. She is also Assistant Director of the Temple University Collaborative on Community Inclusion of Individuals with Psychiatric Disabilities, a national center that acts as a resource to community mental health centers. Snethen led a small pilot program called ICAN:BIKE, using Indego bike share, for mental health patients who were interested in biking more. 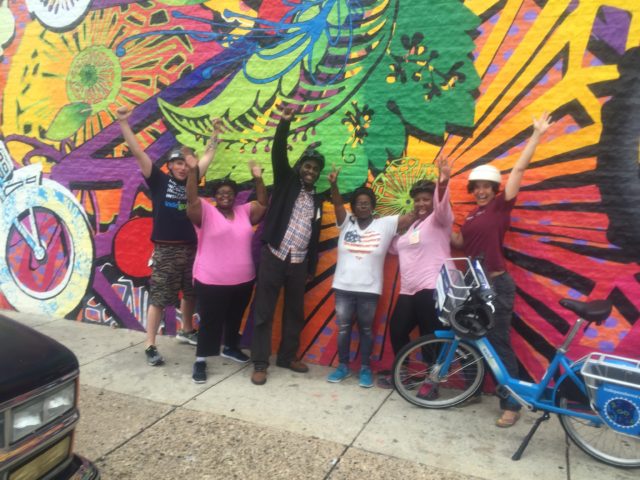 Snethen shares how she worked with patients to get them used to Indego. “We talked about what bike share is. We practiced in a parking lot. We went to a park and the grocery store, so they could have practice checking the bikes in and out of different stations.”

Similar to Courtney’s patients in Minneapolis, the population Snethen served was disproportionately low-income and non-white. All of the participants she worked with relied on Medicaid support.

“Transportation is often a barrier,” she says. “It’s a very sedentary population; they don’t get the same physical activity as the general population. And they have a lot of financial barriers.” Subsidizing a trial with bike share is often cheaper for mental health centers than paying for other kinds of transportation to their programs.

The science behind biking and mental health

The act of cycling has been shown to reduce measured saliva free cortisol levels compared to control activities. Cortisol is a hormone known for its association with the body’s stress response.  Another study looked at biking as a way to improve brain connectivity among schizophrenics, and found that bicycling after having already learned how, promotes brain connectivity.

The social side of bicycling helps too. “We’re social creatures,” says Cho. “If everyone had access to a bike share network, it could be part of the programming of what people do. This can work. But it takes a multi-year, long-term approach.”

Courtney agrees — that’s why her program also offers memberships to her population’s social peers as well. “We didn’t initially involve families or significant others and friends. That really changed things. Having rides built in was really helpful. There was a group ride, people would build something new, find a new route. For some folks, just getting on the bike once is a big deal.”

Access to green space and the world at large was another motivating factor for some in using bike share. Research confirms that there are tangible mental and physical benefits to exercising specifically in the outdoors. Furthermore, taking in the color green while exercising has been documented to improve mood and reduce the sense of how difficult an exercise session has been.

“Bike share gives you the freedom to be out in nature and in the public without being surrounded by tons of people,” says Snethen. “Buses and sidewalks can be stressful. With bike share, you can be alone but moving around the community. It can take you to places that are a little harder to access. A bus might drop you off at the edge of the park, whereas a bike will take you into the park, wherever you ultimately want to get to.”

Courtney has seen a similar dynamic in her program. “For a big part of our population, they are really stuck in downtown areas,” she says. “To be able to get out and go to Minnehaha Park is a big deal. Until people actually have a way to get out and access it, it just seems out of reach. For a lot of people with high anxiety, the not being in control is too much when riding the bus. Being on a bike you are literally in the driver’s seat.” 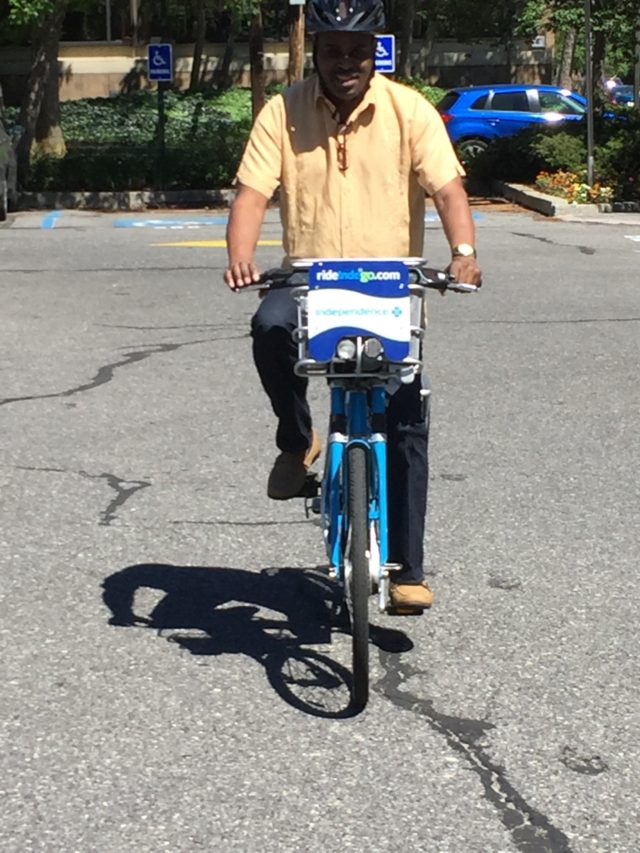 But why bike share in particular and not bicycling in general? Well, it turns out some aspects of how bike share works are a lot easier for individuals with psychiatric disabilities to handle.

“Very few participants have their own cars,” says Snethen. “Bike share gives you access and independence at a different level than a car. A car is unattainable. Even owning a bike, the question is how to keep your bike separate from other people in group housing.”

Cho further elaborates. “Secure housing is an issue. Purchasing a bike can be a huge challenge, especially on disability. You also need money to fix the bike. If you are someone who deals with anxiety, bike share is one less thing you have to be worried about when it comes to bike theft.”

Cho also describes how the “one-size-fits-all” nature of bike share removes the element of having to make the right choice in selecting a bike, something that can be more burdensome for those grappling with mental illness.

Just like any approach, however, bike share isn’t the perfect solution — there are still drawbacks. Program staff cite technological barriers, transiency, station accessibility, and perceptions of who can use bike share as some of the issues that prevent would-be bike share users from taking advantage of the program. This translates to the need for a lot of hands on work at the outset.

Portland State University has also been looking into the various motivations among low-income populations and people of color for why they use (or might consider using) bike share. In the coming months, they will release primary research results on the topic, including how recreational riding factors into the equation.

“A lot of active coaching is needed,” says Cho. “The question is how do you provide one-on-one services to people and still try to make bike share sustainable?”

Courtney describes how, to someone running these programs, it can be rewarding but lonely work. They break new ground every day with their program. “We didn’t have any models,” she says. “We haven’t found a lot of other places doing it. I would love a learning collaborative or something like that.”