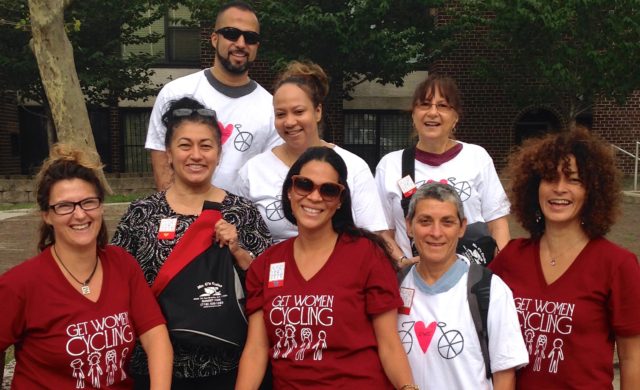 Cycling is still a male-dominated activity, and bike share isn’t much different so far. But could that change?

Advocates and local governments who want biking to be a resource for all residents are seeking methods for increasing female bicycle ridership, including on bike share. In New York City, one organization is taking that goal to heart, with women-focused programming.

The challenges that stop women from biking

“Women don’t cycle because they feel alone and vulnerable,” says Angela Azzolino, Program Creator & Executive Director of Get Women Cycling. “We let them know it’s safe, we’ve got your back.”

Get Women Cycling is a Brooklyn-based organization that seeks to meet women wherever they are in getting comfortable with cycling. The organization runs a yearlong program specifically designed to get women riders on bicycles and to keep them biking throughout time. Get Women Cycling partners with small businesses, local government and advocacy groups.

Azzolino, who was once a bike mechanic herself, has firsthand experience of the ways that trying to enter the cycling world as a woman can be intimidating. “The issue with the bike shops — and this is recognized by the industry as well — is that it’s predominantly male-owned and managed.” Azzolino notes that finding the right equipment that fits women’s bodies and budgets can also be a challenge.

The gap in understanding that Azzolino saw was one of the main reason why she started Get Women Cycling. “All of the marketing materials, programs, and events we develop are specifically designed for women,” says Azzolino.

Azzolino is aware that gender often intersects with other social identifiers such as race and income. “Sunset Park where we’re based is heavily immigrant,” she says. “Probably majority of the people we serve, they’re definitely people of color, wage workers, single moms.” In light of that reality, Azzolino’s organization offers a rental program for individuals who don’t possess the money upfront for a new bike.

Despite initial hopes, bike share on its own hasn’t had a large influence on the cycling gender imbalance — most bike share users are men. Still, in some localities, like Portland, women have been embracing bike share when compared to other types of biking. So there may be some gender lessons to learn from bike share after all.

Azzolino agrees that bike share has potential to reduce the gender gap in cycling. “Bike share is interesting,” she says. “We were really excited [to hear about bike share], because this is immediate access. You don’t have to do the thinking, you don’t have to go to the shop, you don’t have all these decisions to make. Just go up to the kiosk and grab a bike.”

At the same time, Azzolino feels that the bike share bicycles alone are not enough. “There is a learning curve that’s not spoken about,” she says. She believes that ambassador programs and other efforts where a human being helps a new rider get the hang of bike share can make a big difference.

Azzolino also says that she has heard some women wonder about how they can use bike share with kids in tow, a concern that may take time to resolve.

One of the most persistent challenges in encouraging new cyclists to bike — either on bike share or their own bikes — is the fear of being hit by a car. “It’s the number one reason people don’t ride a bike — men and women,” says Azzolino. To combat these concerns, Get Women Cycling has developed an initiative called Neutralize the Commuter Divide, which has been supported by Transportation Alternatives and Families for Safe Streets since it’s inception.

“We came up with an initiative where we are currently reaching out to local driving schools and sharing personal stories with people taking the defensive driving course,” says Azzolino. The outreach has a preventative component, she explains. “We tell them three things they can do to keep cycling safe.” In addition, the students give their suggestions of what people who ride bikes can do to be safer.

The New York City Department of Transportation participates as well, by sharing their annual public report on crashes involving bicycles and cars, as published by NYC agencies. Get Women Cycling can then proactively do workshops in the areas where these incidents are most common.

Get Women Cycling also partners with local sewing machine studios where people can bring in their everyday attire and sew on reflective gear to help them be more visible on a bike at night.

While the organization might not have all the answers yet, it’s clear that they are working to fill an important gap in the service system for female riders of both traditional bicycles and bike share.