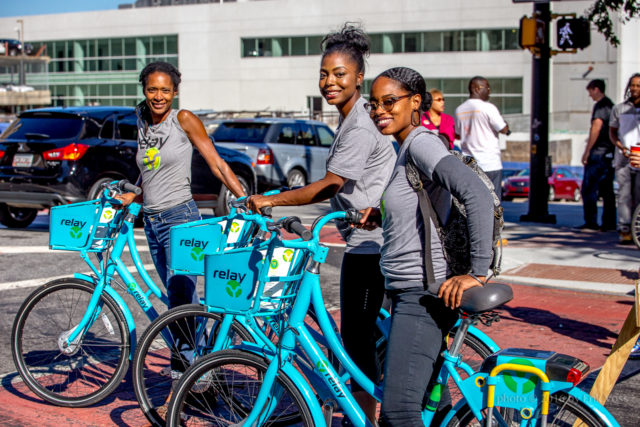 Atlanta Champions at the Atlanta Streets Alive event in October 2016. Image courtesy of Erik Voss and the Atlanta Bicycle Coalition.

A bold, community-based program is striving to make inclusivity a cornerstone of bike sharing in Atlanta’s historically marginalized Westside neighborhood.

The Champions program hired 10 Westside Atlanta residents to become local advocates for the Relay bike share system and biking as a means of transportation. The Champions have gone through 40 hours of training to learn how to best outreach to community members, develop their own positive relationship with the Relay bikes, and obtain some professional development resources in the process.

Partnerships are key to success

Those running the Champions program are the first to admit that they couldn’t have done it alone. “In terms of the success of the initial outreach, I have to emphasize the importance of having partners,” says Rebecca Serna, Executive Director of the Atlanta Bicycle Coalition. She notes how multiple organizations combined forces to implement the program, including the City of Atlanta, Cyclehop, Red Bike and Green, WeCycle, and Urban Perform.

Throughout the process, Serna’s organization has worked to be responsive to the needs of its nonprofit partners. The partners  received financial support for their involvement in the training and outreach activities.

What biking has meant for one Champion

Kysha Hehn is a participant in the Champions program who talks animatedly about her positive experiences. She says the program has helped her and her children grow much more comfortable with biking, as well as build relationships within her own community.

“Within a month of being in the program, our kids and I have been really taking on the roads.” says Hehn. “I went from zero to 50 in like a week.” She feels grateful that the program includes residents like her who don’t have a formal cycling background. Hehn notes this openness as a strength of the Champions coordinators. “They say everyone has a place on a bike and everyone can be a bike advocate,” she explains.

Hehn feels that the Champions program is important to changing the perception of who can use the Relay bike share system. “When you see people who are dressed just like you, who are out on the bike in common clothes, getting around the city, using that as a form of transportation, it becomes accessible.”

Biking has also given Hehn a new way to experience her own city. “The perspective is really beautiful. I’m an environmental educator, so I’m pretty experienced with where the streams and creeks are. There are the same pathways and arteries through the city on a bike.” However, when driving in a car, she says it is much harder to be aware of, or to appreciate, these natural resources.

Becoming a Champion has also improved Hehn and her family’s sense of connection to community members. “We ride and say hi to our neighbors now, rather than being encapsulated in our cars with no on-the-ground relationship,” she says. 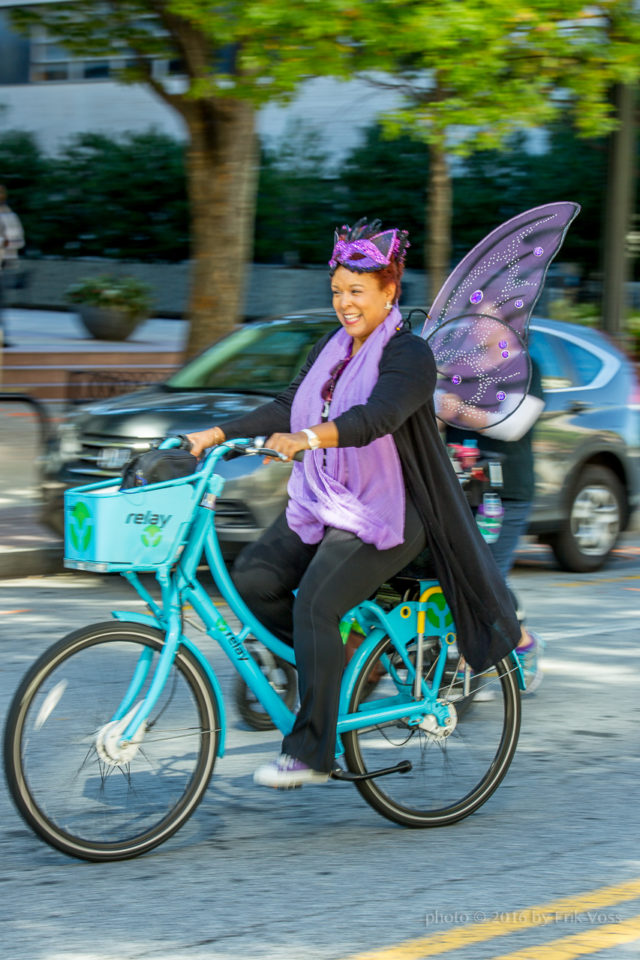 A cyclist at the Atlanta Streets Alive event in October 2016. Image courtesy of Erik Voss and the Atlanta Bicycle Coalition.

alabanza expands further on what that goal meant for the nuts and bolts of the curriculum. “The curriculum was broken up into three parts: What would you need to know to go out into the public and talk to anyone about bike share? Then was the part on you and your bike. Then the last component was professional development. I introduced them to resources around public speaking, but also to people who would enhance biking as a lifestyle, and a way of being well — physically, environmentally, and financially. That three-pronged approach was really important.”

Aside from the content of the program, alabanza describes how important it was to her to make the experience active and to respect the reciprocal learning process. She thought often about questions such as, “How do you make it interactive? How do you get them to apply what we’re talking about to their own lives?” alabanza involved many guest speakers and made sure to incorporate a bike ride into every single day of training. “They were constantly being able to implement what they were learning,” she says. “They added a lot of great information, it went both ways.”

Cycling and bike share improvements aren’t met without controversy, however. As in many other low-income communities in the U.S., new investment is sometimes viewed with a wary eye.

“The Westside is predominantly black,” says alabanza. “There can still be a negative connotation. When you bring bike share in this formal way, some are thinking gentrification, taxes going up, infrastructure not being for people in the community.” She notes that technology barriers and mistrust in sharing debit card information can be sticking points, as well as community members not seeing bike share as a realistic resource for families with children.

alabanza talks about how important it is to genuinely acknowledge community concerns. In the end, she sees the open and supportive attitude of the Champion program as something that could help it ultimately be effective. “It’s important to come in saying we want to pay to work with you, to build a real partnership.”

Regardless of how the Champions program may grow and evolve through time, it has already made a clear, positive mark on the lives of the participants and organizations involved. As Champion Hehn shares, “It’s been transformative, it really, really has. I really hope that the program does take off and transforms Atlanta according to its mission. Seeing the organizations that have come together, it just feels that there is a sense of community that orbits around the entire program. It just brings people together.”