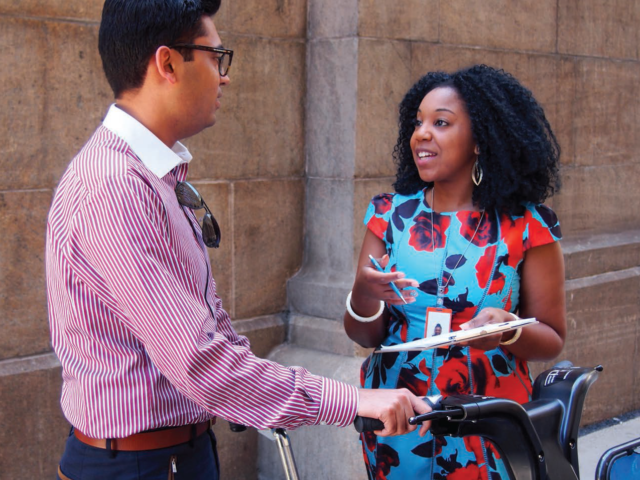 The bike sharing world just got a new resource for learning real information about riders and their motivations: the Bike Share Intercept Survey Toolkit.

An intercept survey is “a selection of questions asked to a random sampling of bike share riders or passersby about their current trip, travel patterns, or attitudes and beliefs,” according to the National Association of City Transportation Officials (NACTO), which produced the toolkit to help people implement studies in their own communities.

An intercept survey can be a powerful tool for understanding how a bike share system is doing on equity goals. The way that such surveys are created and evaluated matters for being able to make conclusions from the results.

“It’s important to lower the barriers for community-based organizations to perform these surveys, since they often don’t have as many resources or as much research experience to draw upon,” he says. “At the same time they have amazing potential to engage their community and capture voices that don’t always get heard.”

NACTO hosted a webinar following the release of the survey toolkit where Graves described components of survey methodology that are important to keep in mind when thinking about equity:

Consider how a survey’s timing shapes its sample

Even something as simple as the time at which someone performs a survey can matter. “Doing peak surveying has a lot of implications,” Graves says. “There might be higher volumes, but people who travel at peak might be whiter and higher income due to being office workers. You might miss a lot of shift workers and other users.”

Think about literacy before giving a written survey

Another issue to consider is whether a survey will be given verbally or if participants will be expected to read the questions on their own and answer them. Graves says, “A lot of times the easiest thing to do would be to just hand interns some surveys. But people might have a hard time finding the answers on a page.” Those giving surveys don’t want to let literacy issues impair the accuracy or quality of responses.

Be clear about how the information will be used

Equally important is addressing the historical distrust in some low-income communities and communities of color of government officials or other outsiders to the neighborhood. “Questions have to be clear to respondents,” Graves explains. “They should feel they know why you are asking this. Otherwise they are unlikely to feel comfortable giving you information because they might be a little be frustrated and a little distrustful.”

Aside from advice on how to administer a bike share intercept survey, NACTO’s toolkit also includes a question bank of more than 100 questions in both English and Spanish that surveyors can use. Graves says that drawing from one bank of questions takes some of the guesswork out of surveying and creates standardization between communities. 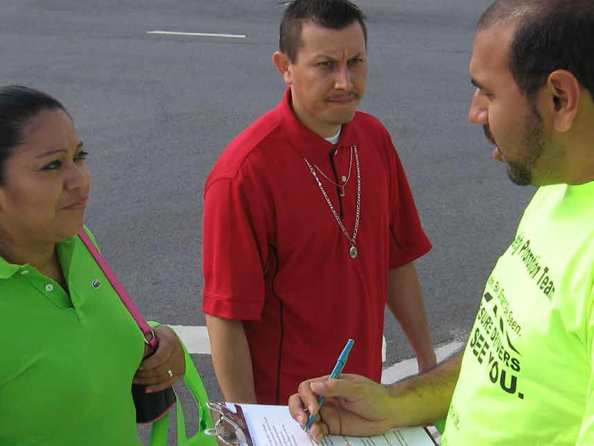 Nina Hoe, currently Associate Director of ImpactED at the University of Pennsylvania, has direct experience performing a bike share intercept survey in collaboration with the Better Bike Share Partnership in Philadelphia. Together they surveyed riders about the Indego bike share system. Hoe offers additional tips on surveying with equity in mind:

Know what questions you are trying to answer

Hoe shares how coming into any community-based survey process with clear goals in mind is important: “When you are going to design a survey for whatever purpose, I imagine that the goals of each city are slightly different, nuanced. You should be very, very clear about what you are trying to measure as your indicators of success. You can know demographics, such as the proportion of African Americans or low-income individuals in a community, but what we were trying to do in Philadelphia was to understand: Are they aware of bike share? Do they know it exists? Do they know they could become a member? Do they know that we offer a cash membership?”

Plan backward from the analysis stage

Hoe also encourages surveyors to be thinking ahead of time about which questions they want to compare to others. Doing that sort of preparation makes it easier to run crosstabs when comparing questions later, as well as understand how one question relates to another.

Hoe also reiterates the importance of considering literacy levels when surveying. “We are always striving to make surveys at a 6th or 8th grade reading level,” she says. Fortunately, there are free tools online for measuring the reading level of any text.

It is okay to consider providing incentives to survey-takers, according to Hoe, if the organization has the resources. But she warns that surveyors need to make sure the incentive isn’t connected to the study questions at hand, or they may end up with a biased sample population.

At the end of the day, it’s important to remember that surveys can actually be the impetus for real-world change. “The critical component is not only what the findings are but how they might drive policy,” says Hoe. “Our survey work revealed quite a lot of actual tangible things for bike share Indego to implement. We worked with the marketing team at Indego to make them happen.”