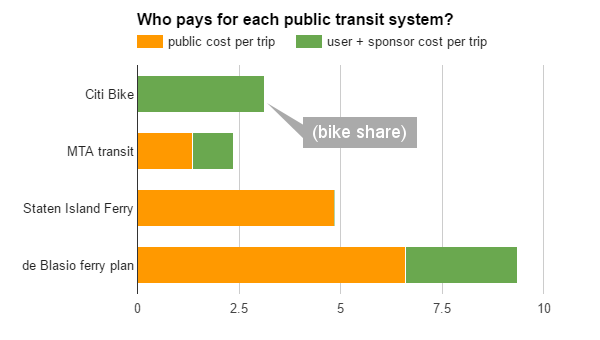 Every public dollar is precious, so it makes sense when the public demands that large amounts of money not be spent on experiments.

But some people are arguing that bike sharing is no longer an experiment — and that the public might actually be able to save by spending more money on it.

That’s the argument public health researcher Lori Suzanne Schomp made last week in a blog post about New York City’s Citi Bike system, which operates with essentially zero public subsidy. Unlike virtually any transportation system in the country, including freeways and airports, all its revenue comes from users and private sponsors.

Citi Bike’s complete lack of direct taxpayer support is unusual, but in other cities the story isn’t wildly different. Many cities have launched bike share systems with federal grants or allowances. But most bike sharing systems require comparatively small public subsidies for their day-to-day operations.

Instead, most of the money comes from users and private sponsors.

In her post, Schomp contrasts this with Mayor Bill de Blasio’s current plan to spend $325 million over six years to heavily subsidize a newly expanded ferry system that won’t offer free transfers from other public transit. The proposed ferries will serve only 35,000 more commuters than Citi Bike’s record, and yet the cost difference is sizable.

At the top of this post is a chart comparing costs and subsidies at several NYC-area public transit services, with the per-trip cost to taxpayers marked in orange. Here’s the data. Citi Bike figures are from 2015, based on net revenue per trip because Citi Bike doesn’t disclose cost per trip. MTA data are operating costs in 2014, from National Transit Database. Staten Island Ferry data are as of 2012, from SILive.com. Ferry plan cost estimates are from NYmag.com.

The story is the same outside New York: Bike sharing is minimally subsdized

What about public transit systems outside New York?

Again, taxpayers cover almost nothing when it’s a bike share system, even when (as in Denver) the cost per bike share trip is actually lower than the cost per mass transit trip. 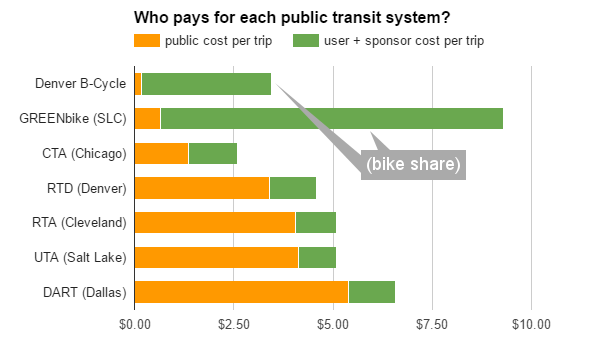 If we did that, she argues, we might see more people getting the small, regular amounts of exercise that are widely understood to be important to physical health.

And if more people were healthier, Schomp suggests that’d be great news for taxpayers:

New York State’s FY 2017 total Federal, State and local Medicaid spending is expected to be $63 billion for the approximately 6.6 million people on Medicaid. A prima facie case follows that Medicaid spending on preventable and manageable chronic diseases is in the billions in New York City yet Medicaid members largely do not live near Citi Bike stations. Consider spending in the billions to restore health versus Citi Bike’s $35 million in annual revenues (and unknown discounts). Spending on a targeted Citi Bike discount program to foster healthy options in the first place could be financially smart.