When her mom gifted her a bicycle, Keola Harrington’s knee-jerk reaction was, I’m not riding this on Philadelphia streets.

The born-and-raised West Philadelphian restricted her bicycle to trails and bike paths, riding only for exercise or recreation. Then, a friend invited her on a group ride in the city. That helped her warm up to the idea of urban riding. That same friend later introduced her to Indego, Philadelphia’s bike sharing system, when it launched in April 2015. She liked the convenience of being able to use it in tandem with walking and the public transit she was already using. Not having the fear of her bike being stolen was also a perk.

Now, Harrington is a bike share convert, and her story illustrates the power bike share has to introduce everyday biking into people’s lives. 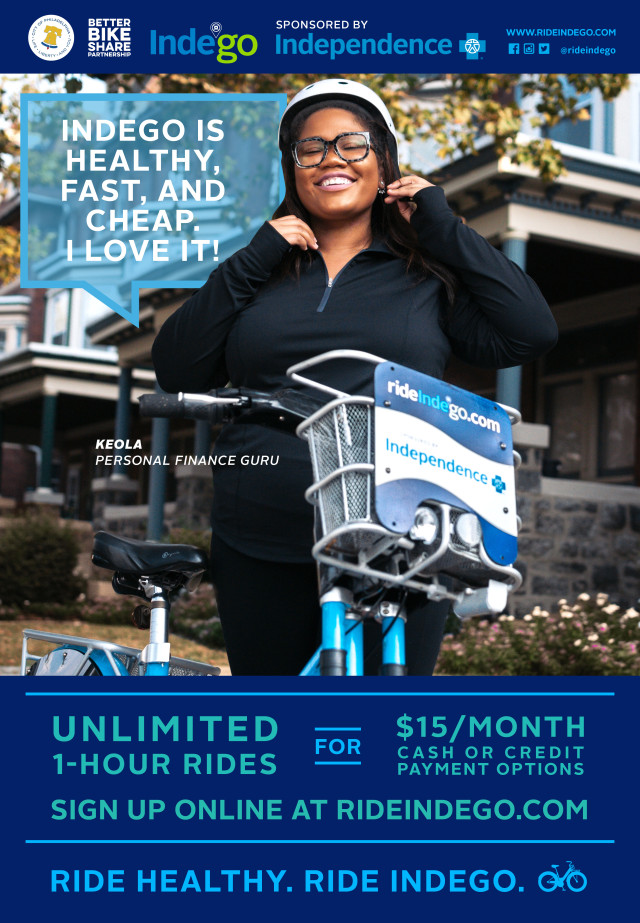 Keola Harrington was featured in Indego’s “Faces of Indego” campaign, which highlighted real users of the system.

“My perception of biking was it was something you did for a workout,” she says. “Now I see it as part of your lifestyle. I used to be too scared to ride in the street. … Then I learned the proper way of riding in the street—how to signal you’re turning, how to protect yourself. I just got really comfortable with it, and it went from there.”

These are the kinds of success stories Indego lives for, so it’s no wonder the bike share tapped her for its community ambassador program a few months after launch. Indego community ambassadors are geographically based neighborhood leaders or influencers who typically have full-time jobs or commitments that keep them too busy or uninterested in a structured 20-hour-per-week street team position.

By day, Harrington is a financial counselor who helps her clients with budgeting, debt reduction and planning. Outside the office, Harrington has been spreading the word about the benefits of bike share, encouraging others to ride, and helping operators connect with new groups or organizations.

“I want to show others that, yes, you can get a workout but you can also use it as your day-to-day transportation,” says Harrington, who doesn’t own a car and commutes around Philly via foot, bicycle or public transit. “It gives your body a break from walking all the time, so you can save some energy.” 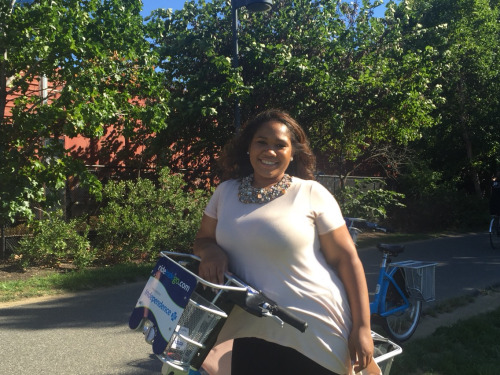 As part of those efforts, Harrington hosted a series of Indego group rides with members of her church. Many of the 15 or so who participated had the same initial reservations as Harrington—they equated bicycles with exercise, not viable transportation. Others in the group reflected an altogether different but equally familiar story—they hadn’t been on a bike in years, or decades, perhaps.

Both types of riders had a good time, says Harrington. “I think Indego is making a great impact. It hasn’t even been a year, but I see it every day. That feels really good.”

Azephra Hamilton of the Bicycle Coalition of Greater Philadelphia, which oversees outreach efforts for Indego, agrees. And she believes Harrington and the rest of the community ambassadors have been a key component of that success.

The Coalition recently held a wrap party to celebrate the end of the busy season for bike share. As part of that, they conducted a survey of their ambassadors and street team members to gain insight into what improvements could be made for the upcoming year.

“We were really successful in getting them excited,” says Hamilton. “They want to do more. That was the biggest takeaway for us. They felt they could have taken even more initiative. They wanted more events scheduled. They wanted more ideas.”

She continues, “I want to make sure they feel empowered to run with that, to try something different. Their knowledge is so valuable.”

For example, one ambassador stressed with the Coalition the importance of having Indego attend community events even if they couldn’t do direct outreach at them. Simply showing their support for the community would yield results. Hamilton says they were initially wary but eventually saw the benefits when other organizations and groups acknowledged them as part of their community and not a disruptor of it.

Hamilton adds that the ambassadors also expressed a desire to get together with one another more than just at the end of the season. That was something Coalition members had predicted the ambassadors wouldn’t want due to their own busy schedules.

“Most of them told us they weren’t doing this for the money,” says Hamilton. “They want feedback from one another and a sense of community.”

The Coalition is currently revamping its ambassador guidebook to reflect what they feel are best practices in shaping a grassroots outreach effort. They plan to make that available to other bike share systems.

After that, it’ll be up to the other systems to find ambassadors as enthusiastic as Keola Harrington.