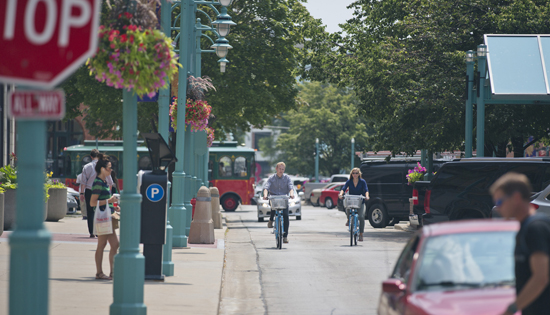 This isn’t just good advice for people riding bicycles. Listening has emerged as a key strategy for bike share systems as they begin to address their equity issues. The voices of the communities trying to be reached matter, and they have no shortage of things to say about bike share and equity.

For his recently completed master’s thesis at The University of Wisconsin-Milwaukee, James Hannig lets these voices take the spotlight. He conducted 26 interviews with community partner organizations, among them social service providers, bicycle advocates and institutions of higher education in Milwaukee and the Twin Cities. Both cities have bike share—Bublr and Nice Ride, respectively.

Hannig uses this qualitative research to draw some conclusions and recommendations—on the importance of building relationships as early and thoroughly as possible, on the appeal of bike sharing as recreation, and on the need to embrace women, families and groups. But what stands out most are the numerous direct quotes from the interviewees themselves. Collectively, they reflect a complicated reality of overlapping issues and the necessity of holistic approaches rooted in history and culture.

Here are seven thoughts that stood out:

“There’s not a lot of listening to what the community is talking about. Maybe the community does not want this [bikeshare]. […] There are other things that need to be fixed; [biking] just might not be high on the priority list. […] You need to frame around that.” – Twin Cities interviewee

“[…] From black peoples’ perspective, the whole concept of protecting the environment, the whole concept of being environmentally conscious, healthy, recycling, things of that nature, those are not really things that you’re going to see my community thinking about much at a high level […] because those are issues that they weren’t involved in creating […] And what you have is this huge inherent mistrust between brown people and white people. […] When it comes to something like biking, that’s kinda something that white people are into and so it often times makes brown people somewhat standoffish, I think, in a somewhat unconscious way.” – Twin Cities interviewee

“I don’t think they will be used as much as in other neighborhoods and I don’t care. We need to have the opportunity. The access needs to be here. It will take a while for people to get used to them, but people will use them. […] If anything, we’re training the next generation.” – Milwaukee interviewee

“You should be asking others ‘What benefits do you see?’ Not just having this one size fits all approach. You push more of these kinds of things if you do a better job of engaging the community from the beginning. Like, ‘How can this be important to you?’ instead of ‘These are the benefits.’ Then it would be something that they feel invested in. […] It’s like house rules. Well, you’re in my house, and this is what we do. Find out what their values are. […] – Twin Cities interviewee

“Even when having the conversation about equity, women have to be at the table. Women need to be looked at as an underserved population specifically as it related to biking. […] When you think of the world of nonprofits and social work, that’s dominated by women. They have perspective in place that, if asked, they’ll share.”– Twin Cities interviewee

“First you have get past the stigma associated with riding a bike: That you have a DUI, that you’re a drug dealer, it’s a stolen bike, it’s a kid’s toy, you’re sweatin’, you can’t afford a car, you can’t afford the bus. […] The majority of people we’re trying to get to get to bike are sick of riding the bus, or their commute is just a few miles, you should try this out. Or they’ve been told by their doctor that they need to get some activity.” – Twin Cities interviewee

“It requires work to be on a bike. This generation now is not a healthy generation. You have to have that lifestyle. Behavior needs to be introduced into the family. You have to start early. It’s like reading. You need to instill a love for the activity. Help them find a purpose for it.” – Milwaukee interviewee

Hannig’s thesis, Perceptions of Bike Sharing In Underserved Communities within Milwaukee and The Twin Cities, is available in its entirety here.