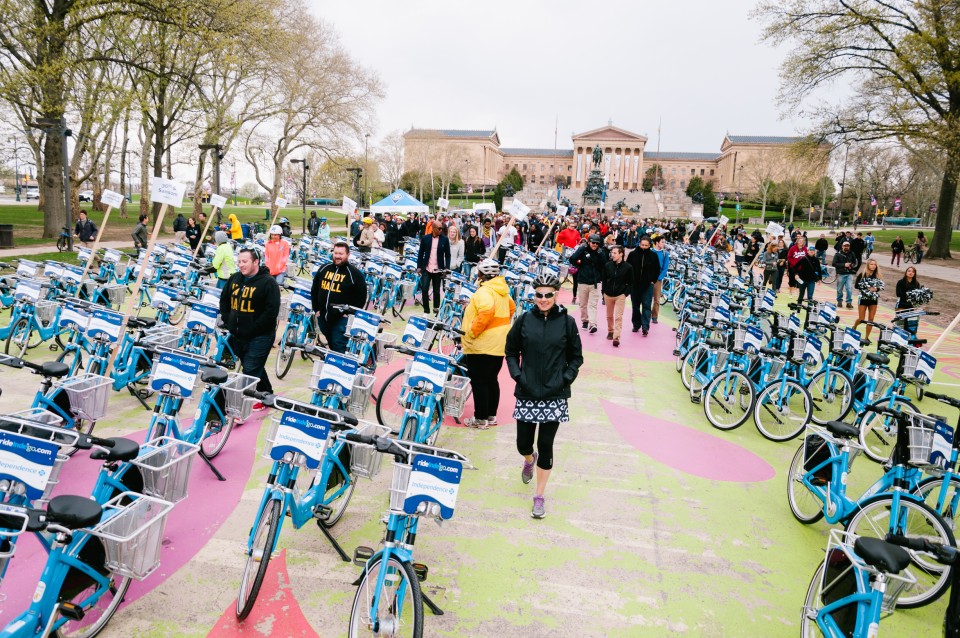 Bike sharing is about more than getting from one point to the next. As we have seen, cities are embracing bike share as a tool for workforce development, health and recreation, and other goals.

Nowhere was this more evident than at the launch of Indego in Philadelphia last month. Dozens of community groups assembled on a chilly, overcast spring day to show their support for the bike share system and participate in a 300-person mass ride that delivered the shiny new bicycles to stations across the city.

Beyond the obvious excitement about getting a new form of transit that many residents have wanted since experiencing (or hearing about) it in other cities, representatives from many of the community-focused organizations were ripe with ideas about how this bike share might be used to enhance their current work or make life easier for their clientele.

Current and former members of PowerCorps pose for a photo at the Indego launch. Photo by Lora Reehling.

A three-year-old AmeriCorps program championed by Philadelphia mayor Michael A. Nutter,PowerCorps PHL provides job experience and skills training with a focus in environmental stewardship. The program is designed for highly-at-risk 18- to 26-year-olds. Many participants have experience with the criminal justice system. Others are aging out of the foster care system. All need a supportive space to learn transferable job skills.

Michael Herrmann hires these young adults, and he says his biggest hope is that someday one of them will return the favor. “One of them will run a Fortune 500 company,” he says. “One of them will be mayor. I always tell them, ‘If one of you gives me my last job, that would be great.’ I want all my people to be successful.”

Herrmann says he recognized immediately that PowerCorps and Indego shared the thread of promoting environmental sustainability, and he appreciated the city’s commitment to creating an equitable system.

PowerCorps cohorts—or crews—provide some of the routine maintenance on the more than 10,000 acres of parklands owned by the city of Philadelphia. They also work with the local water utilities on storm water management and other projects. This means participants travel to job sites all across the city, typically utilizing a city-provided bus pass. Bike share may provide an additional commuting option for some members, and Herrmann hopes they can explore that option.

More broadly, says Herrmann, using bike share could turn them on to larger transportation issues, just as working on greenway projects has turned some on to larger environmental issues. He says he would love to see more alumni move into public service, and he sees the more collaboration with city officials, like the ones at the Indego launch, as a step in the right direction.

“Our PowerCorps members got to ride a bicycle with the mayor,” gushes Herrmann, “and one even showed up in a photo in the newspaper. If you looked at his background, you’d never expect him to be in the same room as the mayor, but there he is.”

Even more directly, two PowerCorps alumni have been hired by the Bicycle Coalition of Greater Philadelphia to work on Indego’s street team. Herrmann hopes his organization can refer even more people going forward.

“As Indego develops, we will keep finding ways to use it,” promises Herrmann.

Bethany Welch, second from right, poses for a photo at the Indego launch. Photo by Darren Burton.

Sometimes people want to help but don’t know how or where to start.

Bethany Welch has seen that firsthand. It’s part of the reason she helped found Aquinas Center in South Philadelphia. The church-owned community center is an inclusive space and community resource for the ethnically and racially diverse community surrounding it, as well as a safe and respectful learning place for visitors from other neighborhoods or cities.

“Often people outside the city want to be involved but don’t have a pathway to the community,” she explains.

That’s where Aquinas Center comes in. It helps bridge the gap through an array of programming, which ranges from English literacy classes and legal clinics, to fitness activities and mural projects, and all the way to campaigning for political issues like drivers license rights for undocumented immigrants. The center, which is located in a converted convent, offers urban immersion and service learning projects for church and university groups.

As part of these, Welch takes small groups on walking tours that highlight affordable housing issues. Now that there is a bike share station on the church’s campus, she hopes she can use them to enhance or extend these tours.

“I could do in one hour what currently takes me three hours,” she says, adding that the bicycle quickens transportation without adding a glass barrier between the rider and the community they are in. She believes that is an important component. “They can still see, smell, and experience it.”

As for the people who live near the Aquinas Center, Welch suspects there will be some soft barriers to overcome, but she hopes they too will embrace bike share as a viable form of transportation. (The first step, she says, will be getting materials to people in their home languages.)

Welch’s other hope is that the shiny new bike share station draws interest and attention to other improvements that could be made on the corner of 18th and Fernon streets where it’s located.

“My motivation is to use it as a redevelopment project,” she says. “We have a mural on 17th Street and had hundreds of people come out for it. Things like that go a long way. Right now we don’t have anything to anchor our corner at 18th. Maybe now we can get proposals and partners for that.”