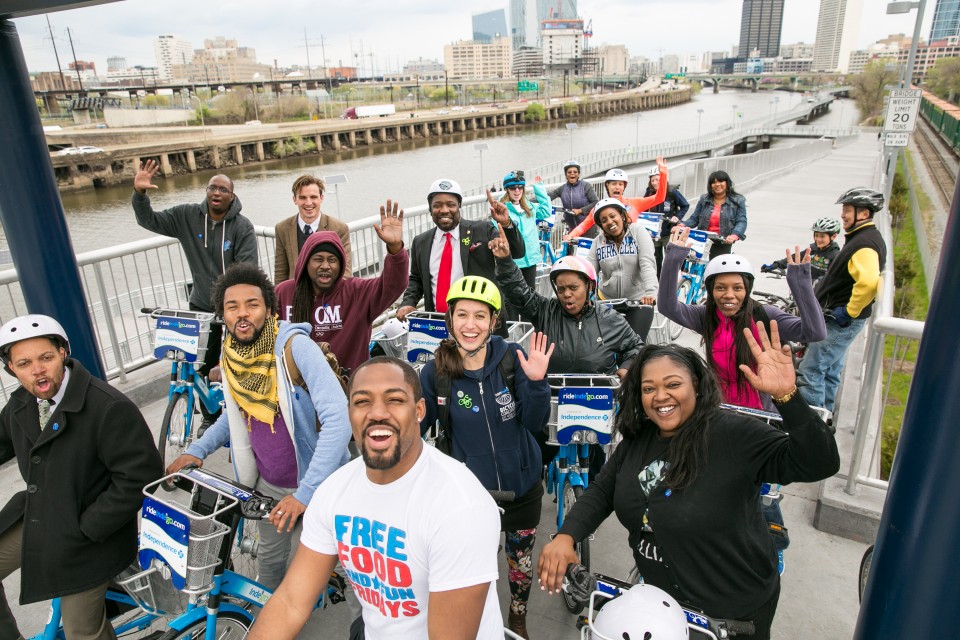 Katie Monroe with the Bicycle Coalition of Greater Philadelphia poses for a photo during the Indego launch event. Photo by Lora Reehling.

I was the ride leader for the largest of the 30 or so groups riding the shiny blue bike share bikes off to their stations, as part of the very epic launch to Philadelphia’s long-awaited bike share system, Indego.

My group, which was headed to the intersection of 22nd and Tasker in Point Breeze, a neighborhood in South Philadelphia that I’ve focused on in my community outreach for the Better Bike Share Partnership. We consisted of a mix of staff of Diversified Community Services (a social service agency in Point Breeze), Point Breeze community members, and Councilman Kenyatta Johnson, as well as some of his staff, all of us excited to take part in the big day.

Several in the group were riding a bike for the first time in a while, courageously choosing this moment to try pedaling again. All together, there were seventeen of us. 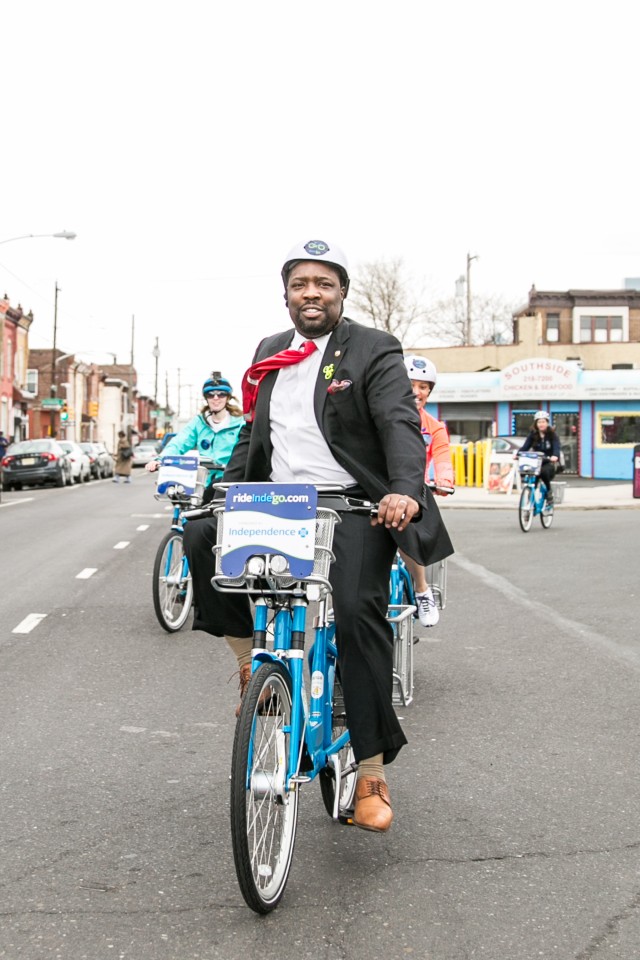 I had a plan for keeping the group together – if there’s one thing I know how to do, it’s probably leading a group bicycle ride – but Councilman Johnson (pictured right) is a tall guy, and almost as soon we set off, he needed to raise his seat. It only took him a moment (Indego seats are pretty easy to adjust) but in that moment our group became two groups.

In a joyous sea of blue bikes looping around Eakins Oval, I had to first figure out which ones were MY blue bikes, and then communicate to everyone the plan for reconvening.

After a lot of yelling, exaggerated pointing to make sure we all exited Eakins Oval together, and much biking-to-the-front and biking-to-the-back to check in with folks as we rode down the Schuylkill River Trail (I swear when I lead a ride I bike twice the distance everyone else does), we finally got ourselves all together by the time we got to the new boardwalk.

Luckily, I think I was the only one who had been freaking out – the rest of my riders were just enjoying the freedom of a bike ride on a brand new bike on the Schuylkill River Trail. Exactly the plan.

We paused for a group photo on the boardwalk ramp before hopping onto South Street, turning down 21st, and ending on Point Breeze Avenue. Sometimes South Philly drivers can be aggressive towards groups of bicyclists, but we were lucky and didn’t run into any trouble. This left us free to fully enjoy the experience of riding as one big group down 21st street, all on matching blue bikes.

There was a constant ding-ding of the Indego bells, an occasional “Go Point Breeze! Go bike share!” chant, and more smiles than I could count. It’s hard to say exactly how I was feeling, since it was such an adrenaline rush and I was in mother-duck, keep-everyone-safe mode – but if I had to describe that moment, I would say: my heart was soaring. And I was definitely no longer panicking.

When we got to ‘our’ station, we pushed the bikes in one by one – waiting for the green light and the three beeps to be sure they were secure. Councilman Johnson said a few words about his support for the bike share program in Point Breeze, I gave a brief speech during which I fear my joy rather superseded my eloquence, and our brilliant photographer Lora took a few more photos of the station full of bikes.

The good folks at Diversified Community Services invited us inside to warm up after the ride, and we got to talk through the details of the new bike share program: How do you sign up? How much does it cost? Can you really return to the bike to *any* station?? (If you too have these questions, click here.) 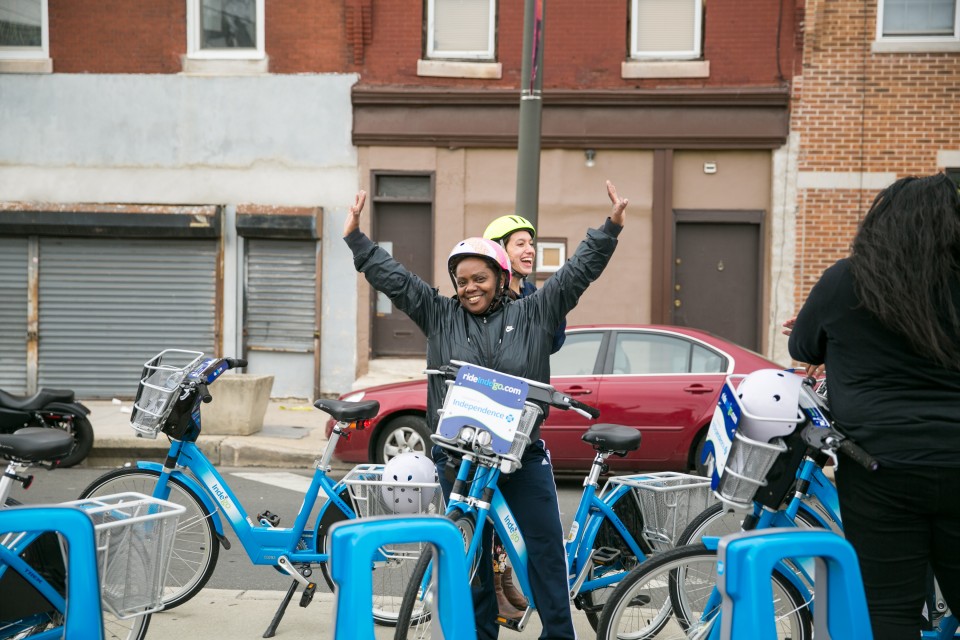 One of our trained Bike Share Ambassadors from Point Breeze, Kim Smith, did a great job of being a resource and answering questions. We gave out some flyers about upcoming Indego events in Point Breeze, and then everyone went about their day.

In some ways, this thing we were working toward – the launch of bike share in Philadelphia, and specifically the launch of a more equitable bike share program in which neighborhoods like Point Breeze are prioritized and included from the start – was over. It took a TON of organizing, meetings, calls, logistics, relationship-building… and I am so proud of the work so many of us have done.

But in a lot of ways, the work is only just beginning. The launch of Indego was Day 1, and every day moving forward is an opportunity to use the tool of bike share to improve people’s lives and communities – as a convenient and affordable transportation option, as a way to support people’s physical and mental health, and as an opportunity to experience one of life’s simple joys in a world that’s felt a bit short on those these past few weeks (Love to Nepal, love to Baltimore).

A bicycle is not a silver-bullet solution to any problem, but it can be a powerful tool in the toolbox we use to address many social issues. My team at the Bicycle Coalition, working as part of the Better Bike Share Partnership, is committed to the community outreach, the event planning, and the long-term relationship building required to truly connect Philadelphia residents with Indego. And Thursday’s ride was a great start.

As I walked out of the Diversified building and went to officially check out a bike for the first time to ride it back to my office, an older gentleman from the neighborhood walked up to the station. I couldn’t tell from the look on his face what he was going to say about the new bikes – he looked potentially skeptical. But after looking at the station for a moment in silence, he looked up at me and said, “This? This right here… is a beautiful thing.”

I can’t help but agree.